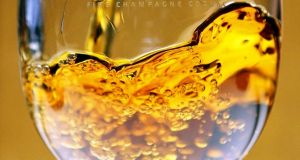 Cognac is poured into a glass at the Remy Martin distillery in Cognac, southwestern France. Remy Cointreau has posted higher-than-expected annual profit, despite a difficult year in China. Photograph: Regis Duvignau/Reuters

Remy Cointreau has posted higher-than-expected annual profit, despite a difficult year in China, saying it will accelerate a drive to sell higher-priced spirits to boost profit margins, sending its shares up to 8 per cent higher.

To achieve that goal, it would focus on selling more products priced at $50 a bottle or more, while investing in newer markets such as Africa, southeast Asia and Latin America at a time of slower growth in China. Remy Cointreau expects the top-end spirits market to contribute 60-65 per cent of sales by 2020 compared with 45 per cent today and drive the current operating margin to 18-20 per cent of sales by 2020, from 16 per cent now.

Remy Cointreau said its operating profit for the year ended March 31st rose 13.5 per cent to €156 million on an organic basis, which excludes foreign exchange moves and any purchases or sales of businesses. – (Reuters)

1 Why gift a son now if it eats into his tax-free inheritance threshold?
2 Flights abroad ban could last all summer
3 Government to avoid ‘cliff-edge’ on Covid-19 payment changes
4 Chris Johns: Economic self-harm is the root of populism
5 A perfect workspace between home and office
6 Stocktake: Playing poker with the day traders
7 ‘The rental situation stops me moving back home’
8 Why are markets booming when a crash is on the way?
9 How much do Irish people earn? And what will Covid-19 do to our wages?
10 Permission sought for €150m film and media campus in Wicklow
Real news has value SUBSCRIBE