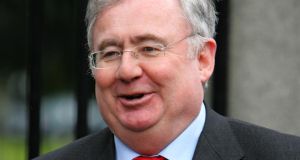 Minister for Communications Pat Rabbitte said the new public service broadcasting charge, which will replace the current licence fee, is unlikely to be ready until next year but could end up bringing in more revenue than the present licence fee. Photograph: David Sleator

The new public service broadcasting charge cannot be seen as a panacea for all the difficulties of Irish media, the Minister for Communications Pat Rabbitte has warned.

The new charge, which will replace the current licence fee, is unlikely to be ready until next year but could end up bringing in more revenue than the present licence fee, he stressed.

Mr Rabbitte said “pretty much everybody” including newspapers had looked for funding from the charge.

Limited largesse
“I’m all in favour of keeping important newspapers in circulation, but I can’t really work out the mathematics that would suggest that a more generous disbursement of largesse from the TV licence fund will be able to solve all the problems that come from the media in 2013,” he said.

Speaking on the RTÉ Radio One Media Show at the weekend, the Minister said demands from independent broadcasters for funding from the charge had to be considered, given their audiences. However, they were fundamentally commercial organisations.

He anticipated the charge would cost no more than the existing television licence but that methods of collection would be better, with a potential €20 million extra to be collected from those evading the licence fee.

The Broadcasting Authority of Ireland (BAI) is looking at a value-for-money review of public service broadcasting on behalf of the Minister and is due to report in the next six weeks.

Mr Rabbitte said a more creative use of the Sound and Vision fund, which currently allocates 7 per cent of licence fee revenue to independent producers, might be a better way of helping to fund broadcasters.

He said the Media Mergers Bill had not yet been published, due to “purely a function of the legislative schedule”. The heads of the Bill suggest that responsibility for media mergers will be transferred to Mr Rabbitte’s department.

The foremost advocate of partially funding newspapers through the charge was former chairman of Thomas Crosbie Holdings (TCH) Alan Crosbie, who said last year it should be widened to “ acknowledge the contribution to public service of newspapers”.