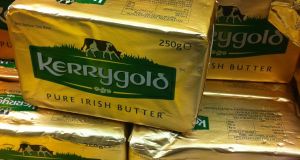 Ornua’s new Mitchelstown plant, which will be known as Kerrygold Park, places the co-op in direct competition with its members for the first time

Undaunted by the global slump in dairy, Ornua, formerly the Irish Dairy Board, has been on a major expansion drive.

In the last 18 months, the group behind the Kerrygold brand has opened new production facilities in Germany, acquired a dairy plant in Shanghai, developed an innovation hub in Spain and opened offices in South Africa.

The investments are part of a five-year transformation strategy designed to ready the co-op for the rough and tumble of the post-quota era, which has already been marked by crashing milk prices.

The next phase of Ornua’s makeover might prove controversial, however. Later this year, it will open a new, high-tech butter production plant in Mitchelstown, Co Cork – its first processing plant in Ireland.

Until now, Ornua’s primary function has been to market and sell Irish dairy produce abroad on behalf of its members, a 33-strong group of co-ops, processors and food firms. About 60 per cent of the State’s dairy output flows through it.

Its new Cork plant – Kerrygold Park – places the co-op in direct competition with its members for the first time. And, as if to emphasise the point, the facility is situated beside the main Dairygold factory, which has a seat on the Ornua board.

To the suggestion that it was setting itself up as a competitor to some of its own members, she said: “Bear in mind, our members own Kerrygold. So our members’ cream will be going into this facility.

Ornua, which has annual turnover of €2.3 billion, began life as a State board – An Bord Bainne – in 1961. It was established to market Irish dairy produce on behalf of the industry, which was populated by small and medium-sized co-ops without the clout to mount a major international marketing campaign.

For a time, it was run by a young, entrepreneurial Tony O’Reilly, who is credited with launching the Kerrygold brand. He used to quip that despite its name, it sold everything but milk.

With the advent of EU membership in the 1970s, the entity was sold by the government to the co-ops and has the legal status of a co-op itself. By the 1980s some of the bigger players in the dairy sector such as Kerry began to secure business and develop marketing strategies outside the Irish Dairy Board (IDB) system, which led to tensions. This erupted in a legal battle between the IDB and Kerry over the latter’s stake in the business.

At issue was whether the IDB could dilute Kerry’s shareholding by increasing the shareholdings of other members on the basis of their throughput. Kerry eventually lost the case and ceased trading through the IDB system.

“Even if the Mitchelstown plant is efficient, it begs the question what exactly is the role of Ornua in the post-quota era – a time when Ireland for the first times faces full exposure to world trade. If its central role is not in marketing, then it doesn’t have a unique role and therefore it has no real purpose.”

The chief executive of Lakelands Dairy, for example, sits on the board of Ornua but a relatively small volume of his co-op’s milk goes through the Ornua system. This is because Lakelands has secured separate, presumably preferential, contracts through its own initiatives.

The situation is further complicated by the fact that dairy farmers pay a financial contribution toward the running of Ornua. The levy works out at 0.14 cent per litre supplied. It nets Ornua about €5 million annually, which goes into new product development and branding. It is not hard to imagine how this might begin to rankle if Ornua was taking only small volumes and competing for processing contracts.

The success of Ornua, up to the ending of quotas, is difficult to assess as the dairy industry was effectively guaranteed an artificial price for its product, which was often twice the price of global market rates.

From the evidence so far, the new post-quota era will be a tougher nut to crack. Despite the recent turmoil, the industry remains confident that long-term demand for dairy is solid. That said, headwinds from China and a prolonged Russian trade embargo, now a distinct possibility, are unlikely to make it a smooth ride.

“The system that pertained up to now is unlikely to be adequate for the new global era,” Dolan said, noting the current downturn in milk prices may be symptomatic of a structural change, rather than a temporary imbalance in supply and demand.

Ornua’s decision to establish a production facility in Cork was not taken on a whim and was said to have been arrived at after a long internal debate . One of its primary functions will be production of stick butter for the US market, a key plank of Ornua’s growth strategy, which apparently needed a specialised facility.

Whether it signals the start of a string of processing businesses here or a one-off is open to speculation.