As tastes change in China, and more dairy is eaten, Irish firms find their reputation helps them enter the market 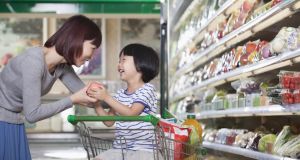 China is often touted as a land of opportunity, but it is when people talk about the food industry that the possibilities become really tantalising. Food is central to everything in Chinese culture.

“Have you eaten?” is a standard greeting still for many Chinese. People talk endlessly about food, ensuring that dishes share a harmonious balance of the five flavours: sweet, sour, bitter, spicy and salty.

All major decisions are made against a backdrop of numerous dishes. A great job for life in the civil service is still called the “iron rice bowl”. The philosopher Lao Tzu has compared good governance to the correct preparation of a fish dish.

There are great opportunities across the board – pork exports are a big component of overall trade, dairy products are growing strong, but there are other areas including food-safety consultancy, and querying whether a ban on beef imports from the EU (imposed after the BSE crisis) be lifted.

China is changing and modern diets are changing with it; expanding beyond the traditional rice and noodle staple to include items that were once considered absurdly exotic, such as cheese.

Kerrygold butter and Dubliner cheese can now be found on the shelves in some, though by no means all, Chinese supermarkets.

A seismic event in the Chinese food industry, and its relationship with the rest of the world, came in September 2008, when six children died, nearly 52,000 were hospitalised and a further 294,000 became ill after drinking domestically produced infant milk formula contaminated with the chemical melamine. “Many in the industry see the melamine scandal as the straw that broke the camel’s back,” says Sharon Palmer, US group PerkinElmer’s food director for PerkinElmer Analytical Sciences and Laboratory Services division.

“There is a huge burst for smaller processors to learn how to improve their food safety. Government regulators recognise the need to improve and streamline things, to provide better oversight from the tractor to the table,” says Palmer.

China has poor rates of breastfeeding, with over 70 per cent of mothers using baby formula rather than breast milk to feed their babies, and foreign formula brands now account for about half of total sales.

Irish dairy has a strong reputation and food companies from Ireland are active in the infant formula market in China.

Since 2008 Glanbia has had a premix manufacturing facility in Suzhou where it makes a range of vitamins, minerals, and other nutraceuticals for infant formula.

“Our business in China also reflects the potential for growth in a market that values the kind of exacting standards of food safety and quality that we can deliver. Today we employ 76 people in China and have a premix facility in Suzhou. China is the hub of our developments in the Asia Pacific region – we have sales offices in Shanghai, Beijing, Singapore, Malaysia, Seoul and Japan, ” says Geraldine Kearney, Glanbia’s director of corporate communications.

Glanbia has also signed a Memorandum of Understanding (MoU) with an affiliate of the Shanghai government-owned Bright Foods, which recently bought the Weetabix brand. The MoU provides a basis for Glanbia and Bright Foods to explore joint market opportunities and distribution channels across Glanbia’s global portfolio of products.

Social and economic trends, such as the rapid growth of higher income consumers and the growing role of dairy in the diet, are positive for food and, in particular, dairy and nutrition companies supplying branded food products and ingredients into the Asia Pacific region.

“Dairy is viewed as a nutrition-based offering and the Glanbia reputation for quality and food safety places us in a strong position to support the growth of key local players. Many of our customers have set up operations and manufacturing bases in China and are scaling up rapidly so it makes sense for us to be located closer to them,” says Kearney.

During a recent Irish Exporters Association mission to Hangzhou, China’s richest man, Zong Qinghou, tasted chocolates by Ann Rudden, owner of Áine Handmade Chocolates, and appeared keen to get them into the network of malls operated by his Wahaha Group. Suddenly scale became an issue.

Earlier this year, agri-engineering firm Keenan signed a deal with a Chinese partner Shanghai Yanhua Bio-Tech to bring its feeder wagons to Chinese farms and the group is focusing on expanding its business in China.

Keenans reckons that by introducing its equipment and solutions on farms, Chinese farmers can improve efficiency by 20 per cent and the company can help the farmers get more from less feed.

An NZ farmer-owned cooperative, Fonterra, has been here for 15 years and has 600 employees. Its aim is to expand from three dairy farms now to 20 by 2020, with the aim of producing a billion litres of milk in China. As well as exporting New Zealand dairy products it also milks cows locally, selling 30 million litres of fresh milk a year to the local market.

Denmark’s Arla Foods bought a six per cent stake in China’s biggest milk producer, Mengniu Dairy, last year, and Mengniu will develop and market Arla Foods’ products in China and other countries, as well as set up a China-Denmark milk technology centre.

Arla will take part in the management of Mengniu as a whole and introduce a Danish-style pasture management system.

“The demand for dairy products is really rolling in China,” Peder Tuborg, CEO of Arla Foods, said in an interview with China Daily in June.

“The Chinese market is huge. We may be a much bigger business compared to other companies in Russia and the Middle East, but our growth potential in China is by far the most promising. We are now working on getting some of that potential.”

The biggest news in the food business of late was the announcement by China’s top economic planning agency, the National Development and Reform Commission (NDRC), that it would probe large overseas infant formula makers, including Nestlé, Danone, Mead Johnson Nutrition and Abbott Laboratories, for possible price-fixing and anti-competitive practices.

Pages of the local media were given over the investigation, saying the authorities had “evidence that these companies charged higher prices in the Chinese market, with price increases of about 30 per cent since 2008”.

The probe seems part of a wider push for greater consolidation of the dairy industry and improve the quality of domestic brands.

In June, Mengniu acquired more than 75 per cent of another major dairy producer, Yashili International Holdings, and this is expected to be the start of a wave of mergers.But greater consolidation creates opportunities for Irish food companies to meet the demand for niche products.