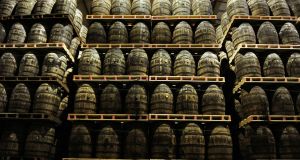 American oak barrels containing Jameson whiskey, produced by Irish Distillers Ltd., are seen stacked at the Midleton distillery. Businessman John Teeling has warned that there may be a scarcity of the Irish spirit within the next few years due to surging global demand. Photograph: Aidan Crawley/Bloomberg

Whiskey magnate John Teeling has warned that there may be a scarcity of the Irish spirit within the next few years due to surging global demand.

Mr Teeling, who has played a vital role in the renaissance of Irish whiskey, said the Japanese market is already experiencing a similar problem due to the popularity of its product.

“Soon there will be a shortage of Irish whiskey,” Mr Teeling (72) told The Irish Times. “What we are making now, you won’t sell for seven years. So we will have a shortage if the rate of growth continues at a cumulative rate over the next six or seven years.”

Mr Teeling, who sold Cooley Distillery to Japanese drinks group Suntory for €73 million in 2012, said Suntory this month started withdrawing sales of its Hakushu 12-year and Hibiki 17-year single-malts because they have no whiskey left.

Suntory’s chief executive Takeshi Ninami has said it could take up to a decade for Japanese whiskey distilleries to meet demand from consumers and retailers.

Sales of Irish whiskey are growing at 10 per cent-plus a year in more than 75 countries. Mr Teeling has built the Great Northern Distillery (GND) at the old Harp Brewery in Louth to supply bulk malt and grain whiskey to the multitude of new brands on the market. Meanwhile, his two sons set up Dublin’s first new distillery in a century in the Liberties in Dublin.

GND is fully operational and has the capacity to distil the equivalent of 42 million bottles of whiskey per year.

“Great Northern is successful because the market is growing so strong,” he added. “But there is no aged malt in Ireland. It’s all gone and all the Cooley-aged malt that Suntory bought and sold for even higher prices is gone.”

Mr Teeling said one client last week begged him to sell 3,000 litres of GND’s old malt. “He was willing to pay me any price for it, but we won’t sell it because we will blend it with other stuff. There is no aged and there won’t be for some years.”

The Irish Whiskey Association, which originally set a target of doubling the global sales of the spirit from six million nine-litre cases to 12 million by 2020, recently announced plans to double them again to 24 million by 2030.

A spokesman for the association said there is no doubt that matching supply with demand will be a challenge. However, he added that this is something that industry has been preparing for in recent years.

“We have gone from having four distilleries to 18. Over the next two years, a lot of those newer distilleries will have matured liquid coming on to the market for the first time. This is in addition to existing distilleries ramping up production,” he said.

“We are the fastest-growing spirit category in the world and are ahead of our 2020 target. We look forward to maintaining double-digit growth and to diversifying into new markets, something which is increasingly important given the introduction of trade barriers,” he added.

Irish Distillers, whose whiskey portfolio includes the world’s best-selling whiskey, Jameson, as well as Powers, Redbreast and Green Spot, said it had invested €240 million across the group to increase production capacity here in recent years.

“We are constantly investing in our capacity to keep pace with demand for our products and focusing on premiumisation in international markets instead of chasing volumes,” said Jean-Christophe Coutures, chairman and chief executive at Irish Distillers.

“More than 30 years ago, our predecessors had the foresight to lay down single pot still stocks to secure the future of the quintessential style of Irish whiskey at a time when sales were languishing. This ambition continues today as we are laying down stock for our family of whiskeys from blends that require five to seven years to mature all the way up to whiskeys that mature over 30 years.”