Greencore shares rise sharply on news of $746m acquisition in US 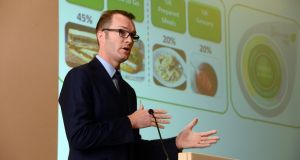 Shares in Dublin-based food group Greencore rose by 9.5 per cent in London yesterday as investors responded positively to its proposed $747.5 million acquisition of Illinois-based Peacock Foods, a deal that will transform its presence in the US market.

The company, which is listed on the London stock market, also reported a near-11 per cent increase in full-year revenues to £1.48 billion for the year to September 30th, although its after-tax profit declined by 18 per cent to £48.5 million.

The Peacock deal was described as “transformational” by Greencore’s chief executive Patrick Coveney. Peacock posted revenues of $991 million in the year to September 25th, more than three times Greencore’s existing revenues for the US.

The deal will be financed through a combination of a fully underwritten rights issue to shareholders to raise £439.4 million and new debt facilities of £200 million from a syndicate of banks co-ordinated by Bank of Ireland.

The rights issue will comprise nine new shares issued at 153 pence each for every 13 existing Greencore shares.

Speaking to The Irish Times, Mr Coveney said Greencore had considered postponing the announcement in the wake of Donald Trump’s victory in the US presidential election last week.

“Did we consider it? Yes,” he said. “But we decided obviously not to. We didn’t believe that the underlying attractiveness of the deal was impacted in any way by that news [Trump’s election] or would be materially different a week later or a month later.

This included coffee chain giant Starbucks, which also uses Peacock as a supplier. “We have their support for the combination,” Mr Coveney told analysts at a briefing.

Mr Coveney said Ireland accounted for about €60 million of revenues last year. Some €10 million was convenience foods supplied mostly through Tesco and Marks & Spencer outlets here, with the balance derived from its ingredients division.