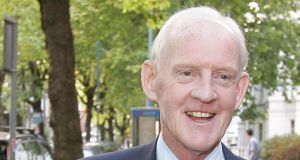 Larry Goodman: his business empire involves myriad companies, many of which are unlimited and do not publish accounts, in Ireland, the UK, Jersey, the Netherlands and Luxembourg. Often ownership goes from Co Louth to the UK to Jersey and back to Co Louth. Photograph: Alan Betson

On August 23rd, 2013, three people assembled in Luxembourg before Maitre Joseph Elvinger to make yet another change in the international structures that lie behind the business and investment empire built up by Larry Goodman over the course of his long career.

On the agenda for the extraordinary general meeting were changes to the share capital of a Luxembourg company called Parma Investments SA. Parma (which has since changed its name to Silverbirch Investments) issues loans to group companies around Europe and, at the end of its 2012 year, the value of those loans exceeded €100 million.

At the August 2013 meeting, which was chaired by British businessman Philip Morgan who is a director of a range of Goodman companies, it was agreed that the share capital of Parma Investments would be increased from 100,000 €10 shares, to one million €10 shares.

The EGM also agreed to change Parma’s articles of association so that, subject to the applicable law, the Parma share capital could be reduced by the repurchase and cancellation of shares, the price to be paid to be decided at the time.

The net effect of this, it would seem, would be to facilitate the flow of money, from Goodman group companies that were repaying loans to Parma, onwards to Rabena, by way of the repurchase of shares and the assignment of loans.

Who owns Rabena is not clear and there are no publicly available registries in Liechtenstein that throw any light on the matter. Liechtenstein has a reputation for secrecy akin to that of Switzerland.

A second Luxembourg company associated with Goodman, Parlesse Investments Sarl, has booked profits of €280 million between beginning operations in 2010, and end of March 2013. It paid tax of €804,000 over the period.

The company has shares in, and loans out to, a range of Goodman’s businesses, including ABP Food Group entities and companies with interests in the Blackrock Clinic, the Hermitage private hospital and the Setanta Centre office complex, all in Dublin. The shares and loans had a total value of more than €800 million in 2013.

The company earns its income from interest payments and dividends paid by the associated companies in other jurisdictions. It is structures such as this that, though lawful, led to last year’s Luxleaks controversy regarding the tax regime in Luxembourg.

Mr Mooney is a former partner with KPMG Ireland. Aburg’s accounts are audited by KPMG in Malta. In 2012 Parma/Silverbirch owned 32.6 per cent of Aburg.

The Goodman business empire involves myriad companies, many of which are unlimited and do not publish accounts, in Ireland, the UK, Jersey, the Netherlands and Luxembourg. Often ownership goes from Co Louth to the UK to Jersey and back to Co Louth.

For instance, at the end of 2010, Parlesse had a €229.8 million interest-free loan from a Castlebellingham company called the Irish Agricultural Development Company (IADC). It does not publish accounts.

The IADC shareholders include a company in Jersey and a UK investment holding company called Miskan Ltd, with an address in Birmingham. Miskan had accumulated losses of €34.6 million at the end of March 2014, according to its accounts. Its directors were Laurence and Catherine Goodman, who are also the directors of IADC, and its accounts are audited by KPMG in Dublin.

It had loans totalling almost €100 million from a number of Irish and Jersey companies, and owed €66.5 million to its parent, Arlesse. Arlesse is an unlimited company based in Castlebellingham, Co Louth, that is owned by Aburg. The Miskan accounts say the Goodman Family Trust, or companies owned by it, own Miskan.

All of which serves to give an impression of a business empire that has a good tax planner, is profitable and values privacy. The ABP Food Group is one of the largest beef processing operators in Europe with a multibillion euro annual turnover, and profits from the business appear to flow into a international structure that manages them in as tax efficient,and as private, a way as possible.

It is not only Silicon Valley that is keeping the experts in multinational tax busy.

8 Facebook to lift ban on political advertising in US