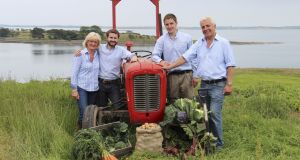 Tracy, Jack, Lance and Martin Hamilton of Mash Direct on their family farm:their business employs more than 180 people and has an annual turnover in excess of £15m

Establishing Mash Direct 12 years ago was, says co-director and multi-award-winning businesswoman Tracy Hamilton, born out of necessity for her and her husband Martin, a fifth-generation farmer. “We were supplying the wholesale market and our return was just declining. We had to think ‘What on earth are we going to do to survive this?’”.

Pondering how to solve the problem of diminishing return, the couple decided to develop real farm-to-fork produce. Their family business Mash Direct, on the shores of Strangford Lough, Co Down, now employs more than 180 people, has an annual turnover in excess of £15 million and sells its produce in the UK and United Arab Emirates.

Back in 2004, the couple realised that in order to keep their farm going, they had to innovate and add value to what they were producing. “Martin had noticed people’s shopping habits had changed and that quality and convenience had become phenomenally important. The market doesn’t come to you, you have to think creatively,” she says.

Starting with mashed potato and other root vegetable dishes, they now produce more than 40 different products – all gluten free – which are stocked in Tesco, Dunnes and Musgraves (SuperValu and Centra) in Ireland, as well as supermarkets in the UK and the UAE.

“Although we began the new venture on a shoestring, the success of the business has ultimately meant the investment of hundreds of thousands,” says Hamilton. “We designed and manufactured our own cookers. We didn’t want a pumped product because the taste and texture of our food is really important, as were the vegetable varieties, so we designed and made the cookers ourselves.

“We are the farmers, so our food is literally from farm-to-fork. We control the whole product from the seed selected for flavour to the method of cooking, the packing – everything happens on our farm.”

Hamilton believes the family caught the crest of a wave in terms of consumer demand but also that the success of their business has been driven not just by producing a quality product but by them being proactive in terms of marketing.

Going from farmers to cooked food manufacturers involved a steep learning curve for the Hamiltons. “Food production is extremely complex and being able to scale up has been a phenomenal experience. We’ve always been building and streamlining in advance and watching our processes and our costs. You can’t tell a major customer that you can’t supply them – you’ve got to be able to produce 52 weeks of the year.”

Investing in the right people early on was important for the business. “We have got a very good team of very driven people. We have an open-door policy with very loyal staff.”

The company has three non-executive directors on the board who bring a fresh perspective, while their sons Lance and Jack also work for Mash Direct.

The company has found an unexpected market in the United Arab Emirates. “We never dreamed we’d be selling mashed potato in the desert so selling it from supermarkets in the United Arab Emirates has become a phenomenal market for us. People are astounded that it is a fresh product – often we can get it to Dubai as quickly as we can get it to our Irish or Scottish customers.”

Again, contact with suppliers and the family roots of the business have proven appealing. “The supermarket managers could not believe that we have come to meet them. They had never met the producers of their products before but part of our brand is that we are very visible,” says Hamilton. “People love family businesses and what they stands for. There is an element of trust when it comes to family businesses.”

For Hamilton, the latest challenge has been the Brexit vote.

“We were surprised at the outcome of the referendum but we have been farming for six generations and there have been many twists and turns in that time. Sometimes you win and sometimes you learn. We will continue to grow and innovate strongly. At the moment, we are selling one pack every two seconds and the future represents an exciting opportunity to build on that.”