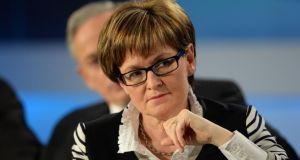 Maireád McGuinness: her call on the EU to immediately drop the superlevy regime in light of the impact of the Russian ban on dairy produce was rejected. Photograph: Alan Betson/The Irish Times

The EU’s handling of the impact of the Russian food import ban has been defended by outgoing EU commissioner for agriculture Dacian Ciolos amid calls for more support for producers hit by the sanctions.

Mr Ciolos was speaking at a debate on the issue at the European Parliament in Strasbourg yesterday. Russia banned a range of EU food products following an EU decision to impose economic sanctions on Russia over the situation in Ukraine.

Critics of the EU response included Sinn Féin MEP Matt Carthy, who said the Russian sanctions may be the final straw for farmers already struggling to survive. “Small farmers now need a friend in the European Commission, not a bureaucracy which fails to act while their livelihoods suffer,” he said.

Mr Ciolos said the Russian ban was “a European crisis” and needed a proportionate response “but it has to be coherent and effective”. He said Russia was the number two export market for Europe’s agri-food products and accounted for about one-third of EU exports in fruit, vegetables, dairy products and meat.

Polish MEP Czeslaw Siekierski raised the issue, saying the import ban was caused by a political crisis, yet farmers were paying the price and funds to help them should not come solely from the agriculture budget.

Earlier yesterday, Fine Gael MEP and parliament vice-president Maireád McGuinness called on the EU to immediately drop the superlevy regime in light of the impact of the Russian ban on dairy produce.

More than 33 per cent of EU cheese exports go to Russia and she said the ban was already having an impact on milk prices in some member states. Mr Ciolos rejected calls to stop the superlevy regime and said it would result in the market being flooded with milk and dairy produce.