RTÉ 1, TV3 and TG4 all have major dramas planned for Rising centenary next year 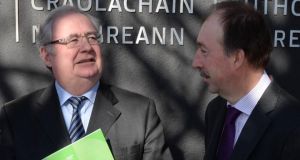 Labour TD Pat Rabbitte with the Broadcasting Authority of Ireland chief executive Michael O’Keeffe: “The BAI is particularly pleased to have been able to support a number of projects associated with the 1916 Rising and we look forward to seeing these on our screens next year.” Photograph: Dara Mac Dónaill

Three television projects about the Easter Rising have received €1.3 million in funding from the Broadcasting Authority of Ireland (BAI).

The money from the BAI’s Sound & Vision Fund will help produce programmes on RTÉ1, TG4 and TV3 which will be broadcast next year for the centenary of the Rising.

RTÉ 1’s flagship Easter Rising drama Generation will be a five-part series focused on three weeks around the Rising. That project will receive €400,000 in funding which is 15 per cent of the budget. This would indicate that the drama’s final budget will be approximately €2.7 million.

The original working title for the RTÉ drama was Rebellion. It features Charlie Murphy, Brian Gleeson and Sarah Greene as fictional characters who become caught up in the Easter Rising.

Rebellion is produced by Zodiak Media Ireland and Touchpaper Television in association with Element Pictures, and is written by Colin Teevan who wrote Charlie, directed by Aku Louhimies, and produced by Catherine Magee.

The TG4 project is a Súil Eile take on the Rising. Wrecking the Rising follows three accidental time travellers whose presence in Dublin threatens to change the course of history. Sound & Vision is providing €600,000 or 40 per cent of its €1.5 million budget.

Trial of the Century asks the question: what if the leaders of the Rising had received a criminal trial instead of a secret court-martial? How would they justify what they did?

Speaking about the announcement, BAI chief executive Michael O’Keeffe said: “The BAI is particularly pleased to have been able to support a number of projects associated with the 1916 Rising and we look forward to seeing these on our screens next year as the country marks the 100th anniversary of this major historical event.

“Without licence fee funding, through Sound & Vision, landmark projects such as Charlie or Red Rock would not have been possible.”

Among the major TV projects are €200,000 for Cartoon Saloon who are making an animation drama The Breadwinner based on a popular popular children’s novel by Deborah Ellis. The Breadwinner tells the story of Parwana, a 12-year old-girl growing up in Afghanistan in 2001. When her father is arrested, Parwana dresses as a boy in order to work and provide for her family.

Roads Entertainment Ltd has received €150,000 to develop a bilingual drama Song Of Granite about the life of Irish traditional singer Joe Heaney for TG4.

Kavaleer Productions receives €350,000 for Kiva Can Do! an animated pre-school series about a five-year-old girl Kiva, her best friend, Saul Dunne and her dog Angus. It will be broadcast on RTÉjr.