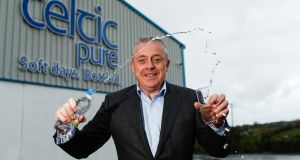 Celtic Pure’s Padraig McEneaney: he said the business grew by 27 per cent last year, with sales of about €8.6 million. For 2016, it is targeting the €10 million sales barrier for the first time.

Celtic Pure, the Monaghan-based mineral water company, will later this year put into operation a plan to raise up to €5 million to finance an expansion of a bottling facility, which it hopes to build in 2017.

The business, controlled by local businessman Padraig McEneaney, is working on an expansion plan to potentially double its sales in coming years, with much of the growth expected to come from export sales.

The company is seeking to gain a foothold in the US market this year. It has struck deals with distributors to sell its product in restaurants there.

Mr McEneaney, who founded the business on land adjacent to the family farm in 2000, says the business grew by 27 per cent last year, with sales of about €8.6 million. For 2016, it is targeting the €10 million sales barrier for the first time.

The business, which also sells its bottled water through most major retail chains in Ireland, has grown rapidly in recent years, with sales of €4.9 million in 2013.

“The future investment in our facilities will bring the business to the stage where we can target sales of €18 million to €20 million,” Mr McEneaney said.

Celtic Pure is in talks to acquire a plot of land, adjacent to its current premises, to facilitate the planned expansion. The investment will include warehousing facilities and more efficient bottling lines.

It will also have to tweak its brand and packaging to meet the requirements of the US market, where food products are extremely heavily regulated.

While the business is relying on exports for much of its future growth, Mr McEneaney said Celtic Pure is still targeting further sales growth at home.

He said a decision has not yet been taken on whether the capital for the planned expansion will come through debt or through investors. “All options are on the table. Myself and my wife have always financed the business ourselves.”

Enterprise Ireland has also backed the business with preference shares in the past.

Celtic Pure, which recently signed a sponsorship deal with the Football Association of Ireland, employs about 50 staff. As it bulks up its marketing and administration functions, this could rise to about 75 in the coming years.