Acquisition of ThinkThin could give Glanbia ‘more mass appeal’

Davy Stockbrokers say the deal was ‘not cheap’ 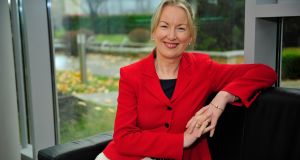 Siobhan Talbot, group managing director of Glanbia Plc, poses for a photograph at the company’s offices in Dublin, Ireland

The acquisition of ThinkThin could give Glanbia “more mass appeal” as it expands its protein bar range, according to Goodbody Stockbrokers.

The food company acquired the US firm that specialises in protein bars for $217 million.

ThinkThin’s products are sold in grocery and health food stores. The company, which was founded by Lizanne Falsetto in 1999 and has been based in Southern California since January 2014, describes itself as a “passionate supporter of health through nutrition”.

A spokesman for Goodbody Stockbrokers said ThinkThin had seen “very strong growth”, increasing sales at 31 per cent per annum.

“Glanbia is likely to invest in the business in the coming year and take the product into channels not currently served by ThinkThin, such as specialty and the internet,” he said.

“Its position in stores is in the more specialised sports nutrition whereas nutrition bars have a more mass appeal and are sold in different aisles within shops. There may be some synergies in time here, however, such as in distribution.”

A spokesman for Davy Stockbrokers said the deal was “not cheap” but reflected the brand’s “strong position in what is a fast-growing market”.

The deal is expected to close before year-end and will be marginally earnings accretive for Glanbia in 2016.

He said ThinkThin was “one of the leading bar brands in the US today”, and is “particularly strong” in the high-protein segment and across female consumers. Its market share of the broader category is circa three per cent.

All manufacturing is outsourced and existing management, including founders, will stay with the business.

“We would expect Glanbia to continue to invest in the ThinkThin brand in order to expand its channel reach. Longer term, there may also be some scope to bring some manufacturing in-house.”

A spokesman for KBC/Rabo said the acquisition of ThinkThin bars “fills in a white spot” in Glanbia’s global nutrition offering.

“The bar segment is worth $2.8bn in retail sales value, and Glanbia has a limited presence in this segment,” he said. “It does supply ingredients, but did not have a sizable branded offering in bars.”