Chocolate goods group has lost €5.5m so far this year and has had financial problems for a number of years, court told 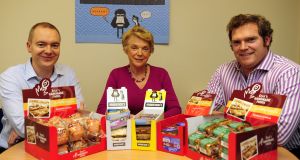 A shareholder in a Dublin-based producer of mainly chocolate food products, employing 107 people, says it is to bring a petition before the High Court seeking examinership.

The matter came before Mr Justice Michael Quinn on Friday afternoon via an application for directions concerning the bringing of the petition.

On the application of John O’Donnell SC, representing Barry Broderick, a director and 10 per cent shareholder, supported by his brother Bernard and parents Ina and Michael Bernard, also shareholders, the judge fixed November 10th as the return date for the petition.

Counsel said the company is in existence for some 26 years and had started out from the kitchen of Mr Broderick’s mother Ina, after which it was named. Its blue-chip customers include Aldi, Musgraves, various cafes and airlines, and a range of entities outside Ireland

The Broderick family between them own 25 per cent of the shareholding and Starkane Ltd owns the remainder.

Enterprise Ireland, arising from a long-standing relationship with the company since 1998, had introduced the directors to a BDO development capital fund which has continued to provide funding. Starkane was incorporated by the fund as a special purchase vehicle to acquire shares and put money into the company and now owns 75 per cent of the shares.

Mr O’Donnell said the company, despite obtaining investment and additional loans, has had financial problems for a number of years and the conclusion has been reached it is insolvent. It had incurred losses of some €5.5 million so far this year and is expected to incur more.

Meetings in recent weeks had not produced a satisfactory response to concerns, including Mr Broderick’s concern whether the company is entitled to utilise the temporary wage subsidy scheme.

An independent expert has provided a report expressing the view the company has a reasonable prospect of survival provided certain conditions are met, including securing investment, counsel outlined.

The expert noted the company has a loyal and willing workforce, a very positive cash flow in the coming months, many blue-chip customers and has traded profitably in the past, if not the more recent past.

Counsel said the petition is being presented by Mr Broderick and an issue may arise about a prior undertaking not to seek court protection without the prior consent of Starkane.

There was an issue whether that undertaking was fully and freely given and Mr Broderick had obtained no independent legal advice in that regard. It may be that Starkane will also take the view the company is insolvent and, notwithstanding the undertaking, court protection is necessary, he added.

Mr Justice Quinn, who was told Ulster Bank is a secured creditor, agreed to make the directions sought and returned the matter to November 10th.