Hollywood star Liam Neeson is lending his support to a major rally that is being organised by trade unions to highlight the impact that hundreds of planned job losses will have on his hometown of Ballymena, Co Antrim. Video: Unite the Union Ireland 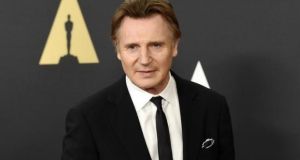 Hollywood star Liam Neeson, who hails from Ballymena, has lent his support for a major rally in the town

Hollywood star Liam Neeson is lending his support to a major rally that is being organised by trade unions to highlight the impact that hundreds of planned job losses will have on his hometown of Ballymena.

Unite’s “Rally for a Future” campaign next month will bring together hundreds of workers facing redundancy at two of the town’s biggest employers; JTI Gallagher and Michelin.

Both companies plan to close their local plants by 2018 which will directly cost the local economy more than 1,800 jobs.

Jimmy Kelly, regional secretary with the Unite union, said it has launched a campaign to highlight what Ballymena has to offer investors –both local and international – and says urgent action needs to be taken to create new opportunities for people facing redundancy.

“Ballymena, like Northern Ireland generally, can offer a well-skilled, educated and committed labour force as well as excellent infrastructural provision.

“Giving up on proactively seeking foreign investment in manufacturing is not an option.

“The Ballymena ‘Rally For A Future’ campaign is gaining momentum as more and more people express their support – already the campaign is being raised in the corridors and chambers of power. We hope that our political leaders are listening,” Mr Kelly said.

The union contacted Mr Neeson to seek his support for their campaign and Mr Kelly said they were delighted when he replied with a “powerful endorsement.

The former Oscar nominated movie star has been invited to attend the jobs rally which will take place on February 6th.

But in the meantime he emailed a letter of support to Unite backing its campaign.

Mr Neeson said: “I wholeheartedly support the Unite the union Rally for a Future, scheduled for Feb 6th. Urgent action needs to be taken by the government to focus attention on the devastating loss of employment in our area.

“We have one of the finest, conscientious, hard-working, skilled and educated work forces in all of the United Kingdom: not to mention one of the most cultured”.

He goes on to say that he believes “Ballymena and Northern Ireland must be made more attractive to potential international employers”.

“They would be lucky to have such an infrastructure and powerhouse of able and willing workers. I believe that nothing less than the future of Northern Ireland is at stake here. Unite, people, elected ministers and political leaders: UNITE!”