Futurist’s vision of the world where houses can be built in a day. All that’s holding us back is a fear of the future 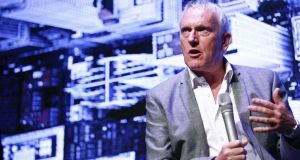 Sounds crazy but the idea is becoming more and more a reality thanks to 3D printing and modular homes, according to James Woudhuysen, professor of forecasting and innovation at De Montfort University in the UK.

Woudhuysen, a futurist who suggested internet TV as early as 1993, and warned about a dotcom bust in 1999, believes 3D printed houses and modular homes built in factories could revolutionise the future of housing, transforming how homes are designed and built.

He says 3D printed homes are not just some future thought, they are here. He points to a company in China – WinSun Decoration Design Engineering – which has already harnessed 3D printing technology to build 10 one-storey houses in a day.

The company built the houses in Shanghai using four giant 3D printers, constructing the walls layer by layer with special quick-dry cement to speed up the process. Each house was approximately 2,100sq ft and cost less than $4,000 (€2.9k) to construct.

Woudhuysen says there is practice of building houses and then adding things like solar panels as an afterthought, when it could all be done in factories from the very start.

“The conventional argument against that is that it will all be too homogenous. There comes a moment in the housing crisis when a homogenous modular home is better than living with your parents”.

He adds there is plenty of room for customisation and personalisation of the modular or 3D printed house once the data is in place.

Woudhuysen believes IT controlled homes and IT built/prefabricated homes face only political obstacles.

“The fact that it’s possible to build houses in hours – that technological potential is obstructed by the fact that the largest asset in Britain is housing. It’s important in Dublin, and Ireland as well. We have to ask in the 21st century if we really want to put all our money in bricks and mortar,” Woudhuysen says.

Woudhuysen, who installed the first computer-controlled car park in Britain in 1968, says technology has to be applied to the real world and not just the world of IT.

“Then it was so new they were putting notes in the coin slot, credit cards in the notes slot. It was a whole new ball game. There was a lot of motorisation happening in Britain at the time and there still is.”

“The problem with IT is that it is not coming fast enough. What’s new is the rhetoric of IT conquering everything.”

Are the robots coming? He says they are not coming fast enough, like broadband.

“The doctrine that IT is taking on jobs and in particular robots are taking on jobs has really come out of nothing, just in the last six month and I don’t buy it. It is true that IT introduced by certain employers can lower employment. It is also true that there is a lot of jobs in IT.”

“Can we really say that IT is being applied and in particular robots, in a way that loses more jobs than ever before? I remain unconvinced of that.”

He points to the latest jobs figures in the US. The US economy added 288,000 jobs in June, according to the Labour Department, and employment there has now grown above a 200,000-jobs pace for five straight months, the statistics show. Woudhuysen, who was the keynote speaker at the Fujitsu World Tour event in Dublin last week, says International Federation of Robotics figures show less than 200,000 robots in total were sold worldwide last year, with this year’s figure likely to be 200,000.

“That gives lie to the view that robots are about to take your job. It says more about our apprehensions than the real pace of IT.” He believes there is a lot of resistance to technology, with established interests hostile to change.

“Japan has had high-speed trains for 50 years or more yet we don’t have them here.

“Right now everyone is worried about who is to blame for a crash between driverless cars? Inhibitions are there before the cars have even arrived.”

He says technology and the future will spell lifestyle changes in terms of sensors.

“You can buy an electronic nose from Amazon to determine if meat is off. You will probably get sensors in the future that will tell you how many calories are in a product or where the product originates from.”

However, he warns that social angst is holding development back.

“Risk consciousness is a barrier to innovation. We have a fear of the future.”