The third annual Diversity in Tech Awards (DITA), in partnership with Microsoft For Startups, takes place virtually on November 10th, 2020

Supplied by Diversity in Tech Awards 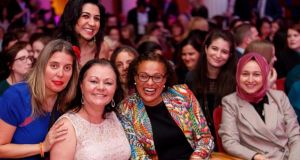 Nominations and tickets to the virtual event will be free to ensure the awards are as open and inclusive as possible.

Technology and inclusion are set to be celebrated at this year’s Diversity in Tech Awards (DITA), with organisers calling for entries for those behind reshaping a futuristic billion euro industry.

Previously known as the Women in Tech awards, DITA will shine the spotlight on the achievements of companies creating a more diverse workplace while striving to narrow the gender gap in the technology sector. It will boast 18 categories with an equal number for both diversity and women in tech.

More than 270 companies and 368 individuals were nominated last year as part of the Women in Tech awards, which included three diversity-focused categories for the first time. The new additions to the competition were in recognition of the growing need to tackle diversity across the tech ecosystem. This year's awards are expected to attract a larger international audience of leading tech executives, VIPs, government representatives and nominees, all of whom play major roles within the thriving international tech community.

In recognising the broad efforts of promoting diversity in the workplace, the awards have been split into two category areas. The Women in Tech categories include a focus on tech leadership, entrepreneurship, digital transformation, mentorship and data science. There will also be a special recognition award for women who have their mark in innovation, which is named after pioneering US computer scientist Grace Hopper. Hopper was one of the first programmers to work on the Harvard Mark 1, the world’s first electromechanical computer.

Due to the unstoppable nature of Ireland’s techpreneurs, the Diversity in Tech categories have increased from three to nine categories this year. They include awards for role models in tech, LGBTQ+ inclusion, social mobility, disability inclusion, cultural inclusion, generational inclusion and health and wellness. An overall International Company of the Year and Special Recognition Award have also been added to the broad spectrum of cutting edge categories.

“This year will be the biggest yet with a view to expanding the scope of the awards in recognition of the growing importance of wider diversity in the workplace. Having received significant interest in previous years we decided to reposition the awards entirely to capture the range of diversity and inclusion initiatives we have seen across the industry. This year we’ve balanced both women in tech and diversity in tech by restructuring our entire format to bring the event virtually. We’re excited to welcome our headline sponsor Microsoft for Startups as we expand our diversity awards and acknowledge the best that the Irish and international tech scene has to offer.”

Speaking about Microsoft for Startups partnership, managing director of Western Europe, Andrew Macadam says: “Microsoft’s mission is all about empowering every person and company on the planet to achieve more and this partnership is totally aligned with empowering people that are making a real impact and progress to encompass D&I in their culture.

“The most successful companies are ones that embed diversity and inclusiveness into their culture from the start. Our role is to support B2B startups that are looking to scale and grow and become world leaders, and we recognise that great companies can come from anywhere, regardless of their background.

“I see the Diversity in Tech Awards not only recognising, but amplifying the voices of founders and companies that are under-represented at the moment. These awards help everyone understand the opportunity and impact of a diverse and inclusive culture and we are excited to be working in partnership with them.”

Internationally there has been strong progress in terms of workplace diversity, highlighted recently in the United States with the Supreme Court ruling preventing members of the LGBTQ+ being dismissed from the workplace because of sexual orientation or gender identity. With nominations now open for the awards, you can nominate inspiring businesses, individuals and leaders from within the tech community who are achieving change in a very tangible way and creating a more open, inclusive environment for all.

The awards are organised by the Dublin Tech Summit team. Nominations and tickets to the virtual event will be free to ensure the awards are as open and inclusive as possible. They will include world class keynote speakers, panels and fireside discussions. Nominations close on the 26th of August 2020.