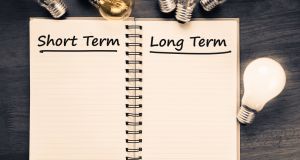 It seems contradictory that in a world where it’s more difficult for businesses to survive over a prolonged period, the focus is on the near term

If Warren Buffet was starting out today as a financial adviser most investors would fire him within a year. That’s the inference from investment strategist Michael Crook’s recent blog post. He goes further; how is it that Buffet, widely considered one of the greatest investors of all time, outperforming the S&P 500 by 450 per cent between 1995-2015, would struggle to hold down a job if he was starting out today? Because, according to Crook’s research, on a one- and three-year basis over that 20-year period, “he had underperformed about 40 per cent and 30 per cent of the time respectively”. “The high long-term returns achieved by Berkshire Hathaway required patience through extended underperformance,” says Crook.

It cannot simply be about the next quarter

Often investors, and by extension businesses, are too focused on near-term success. Jamie Dimon and Warren Buffet teamed up last year to call for an end to quarterly earnings reports. Buffet said: “When companies get where they’re sort of living by so-called making the numbers, they do a lot of things that really are counter to the long-term interests of the business.” Whether your business provides quarterly earnings reports or not, the overall point they’re making holds true. Short-term revenue pressures can have an undue influence on the decisions made by the leadership, with not enough consideration given to future focused plans for growth.

What’s worrying for marketing is that we’re seeing the same short-term approach influence the priorities placed on chief marketing officers. Our recent survey of 1,000 CMOs found a disconnect between the aspirations of what the officers should be doing and what they are doing. The rise of adtech means long-term strategy has become less important as the focus shifts to optimising tactically for short-term sales – a trend is set to continue.

It seems contradictory that in a world where it’s more difficult for businesses to survive over a prolonged period, the focus is on the near term. It’s important to take a step back from the day-to-day and adopt a long-term approach that Buffet has utilised so successfully for decades. It’s the ability to be agile while maintaining a long-term perspective that’s essential today. It’s been described by Sunil Gupta, professor at Harvard Business School, as changing the engine of the plane while it’s flying. That can seem scary and impossible to know where to start, but it’s not about having all the answers. Rather it’s about creating the conditions within the company to successfully grow over the long term, and there are three that carry most significance.

CEO of Dentsu Consult, Conor Murphy joins the Inside Marketing podcast this week to discuss how long-term planning can allay midterm pressures.

Do you value thinking in your organisation?

The first is to create a space for thinking. Albert Einstein famously said, “If I had an hour to solve a problem, I’d spend 55 minutes thinking about the problem and five minutes thinking about solutions”. Findings from the CMO survey suggest we’re spending too much time dealing with tactical solutions, rather than taking the time to step back and tackle the bigger strategic challenges facing the organisation. This can be done at a macro level; Google employees are encouraged to spend 20 per cent of their time working on what they believe will benefit Google most, or a more focused manner can be adapted; putting a strategic future focused unit at the centre of the business. It’s important to pick the right approach for your business, as it will enable the company to execute for the day to day while also innovating for the future.

Unite behind a shared purpose

Secondly, have a shared purpose with both employees and customers. Your purpose is what holds everything together, especially through turbulent times. Successful organisations create environments where choices are made based on the purpose – Brian Bacon of the Oxford Leadership uses McDonald’s to demonstrate this. Facing difficult times in the early 2000s, McDonald’s share price dropped 70 per cent in nine months. The new chief executive, Charlie Bell, put a strong purpose to work within the organisation, which was to “become the solution” in everything they did. Tackling staff turnover was one area they put this to work.

At the time, McDonald’s had 1.6 million employees but a staggering turnover of 76 per cent. The goal was to get that below 40 per cent. Senior executives asked, “how do we get people to stay?” A very difficult task when McDonald’s employs more young people starting out than almost any other institution. Bell challenged them to think differently by leveraging their purpose. He put forward an idea; rather than trying to convince people to stay, McDonald’s should instead put a policy in place whereby people would leave a better person than when they joined. That opened a whole host of positive actions, such as career advice and money-management training, among a host of other things. Resultantly, in a two-year period staff turnover reduced from 76 per cent to 34 per cent. Put your purpose to work in your organisation.

The third thing is that companies need to redefine how they compete, and how they create and capture value. Sunil Gupta spoke last year about how technology is changing business models. The example he gave was Best Buy in the US. The company had become the showroom for Amazon. People would go instore, look at the TVs, have a great experience and then take out their mobile and buy it on Amazon. Clearly, they needed to arrest the impact this was having on sales. They couldn’t simply discount to compete on price, because their cost base was higher than Amazon’s due to having physical retail stores.

What they realised was that there was an inherent value for the likes of Samsung in Best Buys’ survival. These types of companies don’t have their own stores where people can go in and test the product; they’re reliant on Best Buy to provide that. So Best Buy started charging Samsung and other product owners for space in their stores. Samsung doesn’t care if people buy it in Best Buy or on Amazon, but what they do care about, and are willing to pay for, is a showroom where people can compare their products to their competitors. Now Best Buy has stores within the store, with lots of new technologies to attract more customers in. Best Buy went from losing $1.2 billion in 2012 to making $1.2 billion in 2017. It’s a great example of thinking differently about how to create and capture value.

It’s not about having all the answers. The reality is that in setting off on a long-term strategy, you’re only going to see the first few months clearly. As you make your way through those, the next few months will appear clear and obvious. The important thing is to create conditions that allow your organisation to have a long-term perspective. Create a space for thinking and value the contribution it can make to the long-term prospects of the business. Have a clear purpose and use that to determine the decisions you make for both employees and customers. Finally, embrace new business models. Challenge you and your senior leaders to think differently about how the business can create and capture value.