Brought to you by Dentsu Aegis Network 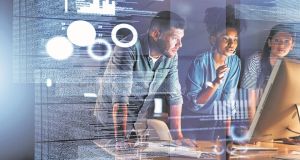 Digital transformation: the endless volumes of data available place a huge burden on reporting, most of which focuses on efficiency rather than effectiveness. Photograph: Getty Images

Renowned management consultant and author Peter Drucker once said, “There is nothing so useless as doing efficiently that which should not be done at all.” It is a sentiment that is particularly relevant in advertising and marketing today. The industry has become obsessed with efficiency and perpetual optimisation, meticulously measuring the minutiae. Efficiency is great, but it can be misleading.
Doing the wrong thing is still wrong irrespective of how efficiently it is done. An abundance of digital data has created micro-industry of measurement, but too often the things we are measuring are so short term that we miss the ability to take a longer-term perspective.
Business today is short term. Jamie Dimon and Warren Buffet have called for an end to the slavish quarter-by-quarter financial report, arguing that short-term decision making is often detrimental to long-term growth. Innovation only happens when we look beyond the immediate. If we set an objective of reducing car pollution, then efficiency means reducing diesel engine emissions, but a far more effective solution is electric engines.

On this week's Inside Marketing podcast, Neal Davies (CEO of BBDO) and Charley Stoney (CEO of IAPI), join Dave to discuss the industry's obsession with efficiency and effectiveness. Listen now:

Davies kicked off talking about the difference between efficiency and effectiveness. He says although people regularly interchange the terms, they are very different. “Effectiveness is the goal, what you want to achieve as a result of communications. Efficiency is one of the things that helps you get there,” he says, adding, “efficiency has now become a goal itself and that’s where problems start to arise”.
Davies believes if we prioritise return on investment (ROI) as the most important success benchmark then you run the risk of false economies. If you invest ¤2 million and it gives you ¤20 million in return then you have an ROI of 10:1. If you invest ¤5 million and it returns ¤40 million then you only have an ROI of 8:1, but ultimately you have created ¤35 million net value or growth in scenario two as opposed to only ¤18 million in scenario one.
If people are rewarded for increased ROI and improved efficiency, then it could be unintentionally detrimental to growth. Maximising revenue is not the same as optimising revenue. Each goal leads to different strategies.
Marketing needs to be effective, albeit efficiently effective. Davies says effectiveness is about having a conversation with clients and understanding exactly what we’re trying to do. “If you don’t have a goal then you can’t score,” he points out. Stoney cites how Specsavers successfully pivoted and is now largely synonymous with both sight and hearing solutions in consumers’ minds. She points out that marketing effectiveness has delivered a lot of that success.
On the issue of increasing focus on short term despite the growing evidence in support of long term, Davies says, “it may not be right but it’s a cost of business”. He insightfully sums up the problem: “It’s much easier to have an efficiency conversation than an effectiveness one.”
The digital transformation of our industry has created an infinite amount of data, placing a huge burden on reporting, most of which focuses on efficiency rather than effectiveness. The convergence of technology and creativity is a trend that is not going away, but Davies rightly warns that in our race to embrace technology we shouldn’t lose sight of the motivating creative idea. We must remember that the role of marketing is to make people care about brands. “The tail shouldn’t wag the dog,” says Davies. The conversation shifted to awards, how the industry measures and rewards effectiveness. I’m in good company here – Davies previously served as global chief executive of Effie Worldwide.
IAPI, the professional body for the commercial creativity and communications industry in Ireland, is joining the Effie network in 2020 and bringing the prestigious awards to Ireland in replacement of the AdFx awards. Marketing has no shortage of awards ceremonies but the Effies are different. Stoney stresses that one of the main reasons for bringing the Effies to Ireland is the fact that they’re a not-for-profit organisation.
“IAPI’s ambition is to help drive marketing effectiveness, we’re not seeking to commercialise awards,” she says. “The Effies will benchmark the Irish industry against global standards and deliver an ongoing education programme for our members.”

Cannes mostly celebrates creativity and AdFx was heavily focused on ROI, but the Effies blend creativity and effectiveness, both of which are important constituents of great advertising.


Effectiveness is the goal, what you want to achieve as a result of communications. Efficiency is one of the things that helps you get there

“It won’t be the case that the highest ROI wins an Effie, bad work that delivered great results may not win as easily as in other ceremonies,” says Davies. “They’re also more open to defining what the agency sets out as a result and what the campaign objectives were in terms of effectiveness, whether that’s increased footfall, downloads or whatever the case is, than to build the narrative as to how the work delivered on these objectives.”
At the Effie launch in November 2019, Davies presented a brilliant case study which highlighted the impact effective advertising can have on business success. The Card Store, a US online card company, wanted to increase online sales for Mother’s Day. Less than 50 per cent of the US population sent Mother’s Day cards so behavioural change was needed.
Ad agency MullenLowe came up with a genius idea: the world’s toughest job. It created and advertised a fake job, head of operations, conducting 24 interviews with people who thought they were interviewing for a real job. The campaign beautifully juxtaposed the work a mother does with that of corporate employment, with the role of head of operations having a seemingly impossible list of job requirements, all things mothers do day in, day out.
Media spend was only a few thousand dollars with classified ads in recruitment sections advertising the fake job. The “ad” ended up as a brilliantly entertaining four-minute video montage of the interview process and people’s reaction to the ludicrous requirements and benefits offered. They smashed campaign targets. In fact, by the end of Q2, the full-year’s sales goals for the entire business had been achieved.
While this is technically an example of both effectiveness and efficiency (it delivered huge ROI given the media investment was so low), it is a brilliant example of media efficiency versus effectiveness. An efficiency answer to a brief with this small a budget may have involved firstly using data to carefully build an audience of people with high propensity to send cards online.
This audience would then be very efficiently targeted with display, social and possibly some six- or 10-second videos, because efficiency data tells us any longer-form video is wasteful.
To use the entire budget to create long-form content with no paid investment supporting it was truly brave. To believe that the video would be so good it would travel organically broke all the marketing rules. It wasn’t an efficient media solution, but it was unbelievably effective.
Sometimes to be effective we must be brave. Neal Davies puts it nicely, saying, “too much of what our industry does is based on muscle memory”. As a creative industry we need to be brave to try new things. An unhealthy obsession with short-term KPIs takes all the oxygen from the flames of creativity.