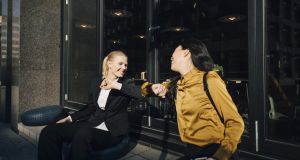 Reaching young people with your message is one thing. Engaging, inspiring and energising them to be a part of this fight against Covid-19 is something completely different

Young people have always been powerful agents of change. But in the fight against Covid-19 they remain a force that has yet to be mobilised. They need to be brought in from the periphery and seen as part of the solution rather than just the cause of the problem.

In recent weeks there has been much debate about how we can effectively communicate with a younger demographic on the severity of Covid and the need for them to reduce their number of close contacts. In September Nphet advised that the virus was disproportionately spreading amongst younger people. The concerns are justified given the fact that despite 18-34s representing just 25 per cent of the population, they have accounted for 40 per cent of Covid-19 cases in the past two months.

This, alongside social media footage sharing large youthful gatherings, has led to all young people being criticised for their behaviour and blamed for the recent surge in infections. The figures speak for themselves and young people in no way should be absolved from their social and moral responsibility, however, we have to ask ourselves, is judgement, blame and criticism the right approach?

A report by the Department of Youth published last week found that young people are feeling ‘unfairly scapegoated’ and ‘undervalued’. It’s also worth remembering that it is this younger cohort that has been disproportionately hit by the pandemic both in terms of long-term impact on future finances as well as immediate impact on social and economic life.

It’s interesting that a group who in recent years have become increasingly empowered and involved in politics and society, from the abortion and marriage referendums to the ongoing call for climate action, have in many ways been left on the side-lines in the fight against Covid-19. Rather than try and engage young people and talk peer-to-peer we seem to be talking down to them, reverting back to the old days of the public service announcements, “Kids, Just Say No to Drugs” and ‘Never Talk To Strangers’. The majority of Covid-19 public messaging aimed at young people to date has either told them what to do or what they’re doing wrong, so it’s no surprise that they feel powerless and alienated.

A different approach needs to be taken where young people are empowered to help stop this virus. Marches through the streets of our country, protesting for women’s rights or against racial discrimination, have been filled, and often driven by passionate young people. We need to learn from this and stop telling young people what to do, and instead inspire them to work together and with the wider community to help combat the virus.

The role of communications and advertising in this is hugely important and looking at how different brands engage with young people is a good starting point. Pulse’s Youth Brand Tracker research in March 2020 found that Nike is considered the coolest fashion brand for 19-37 year olds. Yes, Nike is a consumer brand with a huge focus on product-led messaging, but it also understands that young people value brands that are purpose-led.

Their 2018 award-winning Colin Kaepernick campaign had the slogan ‘Believe in something, even if it means sacrificing everything’. Nike knew this campaign would be divisive, but it also knew that to engage with a younger audience it was critical that the brand stood for something beyond share prices and profits. Even if you are a cynic and believe the campaign was a thinly veiled attempt to sell more shoes, it was indisputably brave. Nike risked alienating an older, more conservative consumer in order to show its belief and support of the issues that matter most to the next generation.

Another local example of a powerful purpose driven campaign is ‘Darkness into Light’, the annual charity walk in aid of Pieta House that takes place in 120 locations across the country. Instead of trying to educate people about suicide prevention, or make a campaign purely aimed at raising money, Pieta House, in partnership with Electric Ireland, created something young people could be a part of. Designing shareable badges for social media, getting people to create and share their own content on their walk and also encouraging people to tell their own real-life stories have been key features of the success of ‘Darkness Into Light’, making it feel more like a movement than an ad campaign.

The success of these types of campaigns show that we need to do more to make young people part of the solution. When lockdown first happened there was this feeling of unity across the country with everyone coming together by staying apart. As time moves on, and the ebb and flow of lockdowns continue, that same feeling of cross-generational unity is dwindling. The once powerful addresses from the government have lost their impact and young people are feeling at best left behind and at worst victimised and blamed. We need to find ways to engage and involve them, maybe that’s through a social media campaign encouraging young people to tell their own Covid-19 stories. Or perhaps young people leading an initiative to encourage their peers to become more actively involved in their local communities. The point is that instead of just creating a campaign that targets young people, we involve them from the very beginning, making them a central part of its ideation and creation.

Alongside the creative and messaging, understanding the right channels to engage with this audience is also crucial. According to the Global Web Index only 51 per cent of 18-34 year olds watch live TV every day, compared to the 59 per cent who watch recorded TV shows or the 62 per cent who watch subscription services such as Netflix. The same can be seen for Radio with 44 per cent listening to less than 30mins per day versus the 54 per cent who listen to more than one hour of music streaming services. No, they haven’t abandoned traditional media channels completely, but their media ecosystem is becoming increasingly diverse and fragmented across many different channels, mediums and platforms.

Social media in particular has gone from strength to strength during lockdown with platforms like TikTok enabling young people to flex their creative muscles, creating their own content and entertainment while stuck at home. At the beginning of lockdown social was a key part of the experience with people sharing photos of their Saturday night zoom calls or home workouts. As restrictions eased these were quickly replaced by photos from across Ireland with #staycation taking centre stage. It shows the important role of social in communicating with this audience, not purely as a platform to push out your message, but as a tool to engage, empower and connect.

We cannot have the same messaging or channel strategy for young people that we do for everyone else. Not because they don’t care or don’t get it, but because it doesn’t represent, involve or empower them in any way. Reaching young people with your message is one thing. Engaging, inspiring and energising them to be a part of this fight against Covid-19 is something completely different.