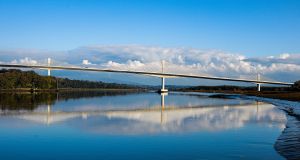 The construction of a world record-breaking bridge in Ireland’s southeast, which will redefine expectations for bridge engineering both nationally and internationally, and a coastal mobility route in Co Dublin are among six projects recognised by Engineers Ireland and ESB in a newly unveiled Engineering Excellence Digital Series.

Launched this week in recognition of the work of Ireland’s talented engineers, the Engineering Excellence Digital Series aims to recognise and showcase inspiring engineering endeavour in 2020 and its positive impact on society. Following an open, free-to-enter competition organised by Engineers Ireland and supported by ESB, six winning projects have been chosen to be profiled as part of the series through video stories on Engineers Ireland’s and ESB’s social channels.

Pat O’Doherty, chief executive of ESB, said: “ESB is proud to support the Engineering Excellence Digital Series as it celebrates the endeavour, impact and inspirational nature of Ireland’s engineering talent. Ireland’s engineers work every day to improve lives and find solutions to big societal challenges, both here in Ireland and overseas. Additionally, by demonstrating the diverse ways that engineers contribute to society, we also hope to highlight the value of Stem (science, technology, engineering and mathematics) and inspire future generations to consider engineering as a meaningful career choice.”

In today’s Irish Times, we take the opportunity to recognise the two winning projects in the Engineering Infrastructure and Buildings category.

The structure is part of the N25 New Ross Bypass scheme which strengthens connections between the communities of Wexford and Kilkenny, while also enhancing local and regional connectivity. By reducing congestion, improving road safety and opening economic opportunities, the bridge has improved the lives of residents on both sides of the River Barrow and, indeed, the much wider community.

The bridge includes four extradosed concrete spans; two of which are 230m in length. The construction method, balanced cantilever, in conjunction with the asymmetry of the tower’s cables on each tower, led to a main cantilever of 140m at the longest stage of construction, a world record for concrete deck extradosed bridges.

Structural analysis tools, such as explicit time dependent creep curves and step-by-step non-linear iterative analysis, were used. The largest cables consist of 125 strands and went through a full-scale fatigue test of two million cycles in a lab in Chicago, one of only two labs worldwide that have the capacity to test cables of this size.

Ireland’s longest bridge will now stand as a world-class 21st century engineering structure. Its opening was a landmark day for the designers and contractors and for Transport Infrastructure Ireland, Wexford County Council, Kilkenny County Council, and technical advisors for the scheme, Mott MacDonald Ireland.

The Coastal Mobility Route, delivered by Dún Laoghaire-Rathdown County Council with project partners, Clonmel Enterprises and the National Transport Authority, is a two-way segregated cycle-lane with buff surfacing, extending over 3.6km in two uninterrupted sections from Newtown Avenue in Blackrock, Co Dublin to Coal Quay Bridge, and from Queens Road to the Forty Foot in Sandycove. With a further 0.9km section through quiet streets, the route is approximately 4.5km in length.

Due to restrictions in movement associated with the current pandemic, there was a significant increase in walking and cycling, with a 100 per cent increase in cycling recorded on the coastal route by Dún Laoghaire-Rathdown in May 2020, compared with the same period in 2019. Pedestrians often faced situations where there was not enough footway width to maintain two-metre physical distancing, which led to people stepping off the footpath.

In response, the Coastal Mobility Route, delivered in less than eight weeks by a multi-disciplinary team comprising of Dún Laoghaire-Rathdown County Council engineers, architects and construction managers, reconfigured the public realm to respond to Covid-19 risks, creating safer and improved facilities for walking and cycling. The project also enhanced the public space to provide safe and inviting places, that the public can visit, spend time in and enjoy while supporting local businesses as they reopen.

With about 20,000 cyclists utilising the route each week, this Coastal Mobility Route now promotes and facilitates a necessary shift to walking and cycling, along this strategic coastal transport corridor, by delivering safe and enjoyable sustainable transport for all ages and abilities.