The Scottish capital had moved on from haggis and fish supper, finds Susan Stellin 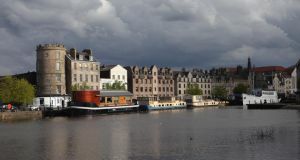 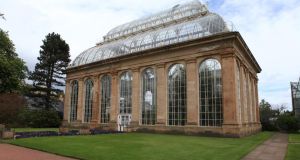 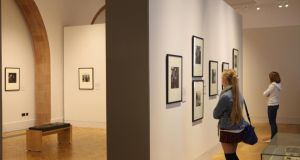 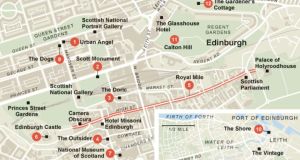 But the Scottish capital’s historic sites and winding walks offer a different charm at quieter times of the year, and its restaurants are the highlight of any visit.

Haggis and fish and chips now share menu space with local, organic and sustainable fare, and there is a cafe, restaurant or bar on practically every street.

That means you can happily eat and drink your way through the city if the weather is wet – which is not unlikely, so plan your outdoor activities around the daily forecast.
Before your trip, check The List (list.co.uk) for restaurant reviews and a guide to exhibitions, shows and events.

3 pm
1. Small Plates & Portraits
Start your culinary tour at Urban Angel on Hanover Street (121 Hanover Street; urban-angel.co.uk) near Queen Street Gardens, where the cakes, muffins and croissants pair nicely with a mug of Fair Trade coffee or a cup of Earl Grey tea.

Little plates and salads (£4 to £7, €4.75-€8.31) emphasise organic and seasonal greens, like polenta bites with rocket (arugula) and Parmesan or a Caesar salad with pancetta and anchovies.

Once sated, pop into the newly renovated Scottish National Portrait Gallery on Queen Street (1 Queen Street; nationalgalleries.org), one of Edinburgh’s many free museums.
Featuring portraits of famous Scots – though not all by Scottish artists – the collection ranges from paintings of historic figures like Mary Queen of Scots to portraits of actors like Sean Connery; the Portrait Gallery also has an extensive collection of photography.


4 pm
2. Stair Climb
If the sky is clear, climb the 287 steps to the top of the Scott Monument (East Princes Street Gardens; edinburghmuseums.org.uk; £4/€4.75), a Gothic tower built in the 1840s to honour the writer Sir Walter Scott. The circular stone staircase narrows precipitously as you ascend, but if you can squeeze past other visitors on their way down (which can involve some sideways manoeuvres), you’ll be rewarded with 360-degree views of the city.

After descending, recuperate on a bench in Princes Street Gardens, once a flooded valley protecting Edinburgh Castle that is now a bucolic spot for a break. Then browse the paintings and sculpture at the nearby Scottish National Gallery (The Mound/Princes Street; nationalgalleries.org). The collection includes works by such artists as Gauguin, Bernini and Sir Henry Raeburn. Often a kilt-wearing bagpiper will be playing on the street outside.

6 pm
3. Pub Stop
Drop by the Doric (15-16 Market Street; the-doric.com), one of the city’s oldest pubs, to sample the selection of 50 single-malt whiskies or the Edinburgh-brewed ales on tap. Built in the 17th century, it was originally a linen shop but now serves whiskies ranging from a 10-year-old Glenmorangie (£4/€4.75) to a 30-year-old Balvenie (£30/€35.66). Even the Doric is promoting “fresh local produce” served in the bistro upstairs, but downstairs at the bar you can munch on a more traditional snack: a bag of salt and vinegar crisps.


8 pm
4. Bistro Buzz
The whitewashed walls and minimalist decor at the Outsider brasserie (15 George IV Bridge; 00-44-131-226-3131) contrast with stately views of Edinburgh Castle through the dining room’s rear picture windows. The mostly Mediterranean main dishes (£13 to £19/€15.45/€22.48) include options like steamed mussels with bacon and pine nuts, roast rack of lamb with Parmesan potato cake, or hazelnut gnocchi with shiitake mushrooms, spinach and pecorino cheese. Reservations recommended, especially at peak times. If you have energy left after dinner, stop by the Bar Missoni down the street for a nightcap, mingling with the fashionable crowd at the Hotel Missoni.


10 am
5. Royal Stroll
No visit to Edinburgh would be complete without a walk up the Royal Mile, which stretches from the Palace of Holyroodhouse (Holyrood Road; royalcollection.org.uk), the Queen’s official residence in Scotland, to Edinburgh Castle, arguably the city’s most famous landmark. Near the palace, you can’t miss the more modern Scottish Parliament (Canongate; scottish.parliament.uk), which opened to mixed reviews in 2004. It will be in the spotlight again when Scotland votes on a referendum in 2014 to decide whether to become independent or remain part of Britain.The route is lined with tourist shops, but be sure to explore the narrow alleys called closes that lead off the Royal Mile. Many have names referencing a past use, like the Fleshmarket Close, once home to a meat market (also the title of a crime novel by the Scottish writer Ian Rankin).

11 am
6. Castle Visit
End your stroll at Edinburgh Castle (Castlehill; edinburghcastle.gov.uk), which sits atop the volcanic hill known as Castle Rock. If you spring for the £16/€19 entry fee, you can tour the buildings behind the fortress walls, including the Great Hall, the Royal Palace and St Margaret’s Chapel, which is the oldest surviving building in Edinburgh. Up near the castle, Edinburgh’s Camera Obscura, dating back to the 1850s, is also worth a visit. Visitors gather in a dark room to view live images of the city, created by using a mirror, lenses and a hole in the ceiling that lets in light, relying on principles of refraction that work best when the sun shines.


Noon
7. History Lesson
On your way back down the hill, take a detour to the National Museum of Scotland on Chambers Street, which also just completed a renovation in 2011. The diverse exhibits cover Scottish history, the natural world, science, art and design. One of the museum’s most famous attractions is definitely Dolly, the cloned sheep created at the University of Edinburgh, now preserved for posterity by taxidermists.

1:30 pm
8. To the Dogs
Offering a simple take on the gastropub tradition, the Dogs (110 Hanover Street; thedogsonline.co.uk) serves Scottish favourites like steak and mushroom pie, haggis, black pudding and bacon hash with a fried duck egg, and fish and chips with mushy peas. For vegetarians, there’s a roasted squash, goat’s cheese and spring onion barley risotto. Portraits and statues of dogs adorn the walls and line the staircase, as if awaiting a taste of your meal. After lunch, explore the shops on nearby George and Princes streets, a mix of familiar global brands and the ornate department store Jenners, a longtime institution in Edinburgh.


4 pm
9. Flowers and Tea
If the weather is nice – it can shift quickly in Scotland – it’s worth a visit to Edinburgh’s 70-acre Royal Botanic Garden (20A Inverleith Row; rbge.org.uk). Highlights include the Glasshouses, home to palm trees and tropical plants, the Queen Mother’s Memorial Garden and the Scottish Heath Garden, featuring plants commonly found in the Scottish highlands. It’s also a nice place to enjoy the greenery of Scotland, or have an afternoon cup of tea at the Terrace Cafe. (To keep up with the locals, aim for several cups of tea every day.)

7 pm
10. By the River
Head down to Leith, Edinburgh’s port on the Firth of Forth, an industrial waterfront that is now a dining and drinking destination, including restaurants that boast Michelin stars.Have a drink at the Shore (3 Shore; fishersbistros.co.uk), an old wood-panelled pub overlooking the Water of Leith, then wander a few blocks up to the Vintage (60 Henderson Street; thevintageleith.co.uk) for dinner.Serving craft beer, a grazing menu of charcuterie like hot-smoked pig cheeks and main dishes like rainbow trout and beet root with foraged greens, the Vintage blends traditional and modern cooking in an atmosphere that offers a similar mix. Dishes arrive on wooden boards, but the open kitchen and sleek lighting lend a more urban feel to the decor.


10 am
11. Up the Hill
Start the day with a walk up Calton Hill, with views of Leith and the Firth of Forth, Edinburgh Castle and the volcanic hill known as Arthur’s Seat.At the top of Calton Hill, the 12 Doric columns of the unfinished National Monument were meant to honour those who died in the Napoleonic Wars, but are now referred to as “Edinburgh’s disgrace.” For a higher view, climb Nelson Monument, a telescope-shaped tower built to commemorate Admiral Horatio Nelson’s victory (and death) in the Battle of Trafalgar.