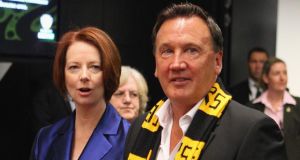 A poll this week has shown that 61 per cent of women and 42 per cent of men think sexism is a problem in Australia. Given the events surrounding Australian prime minister Julia Gillard this week, the rest of the world perhaps thinks the same.

But the real problem is not whether Australia has more sexists than other western nations; it is that sexism is tolerated and openly expressed, seemingly without censure. That is why a fundraiser for opposition political candidate Mal Brough featured a menu containing crude references to Gillard’s breasts, thighs and genitalia.

It is why radio shock jock Howard Sattler repeatedly asked the prime minister if her partner, Tim Mathieson, was gay. And it is why opposition Liberal Party leader Tony Abbott had no qualms about appearing in front of signs referring to Gillard as a “witch” and a “bitch”.

Visceral hatred
It is almost impossible to picture all of the above happening in most other modern countries. Can you imagine the outcry if, for instance, a political rival had stood in front of signs calling Mary Harney a bitch or if a menu had referred to her genitalia?

How does Gillard engender such naked, visceral hatred? It is a hatred remarkable even for a country that sometimes seems to be the land that political correctness forgot. After an initial poll boost when Gillard led an internal coup against former prime minister Kevin Rudd three years ago, she soon after took the Labor Party to a disastrous election in which it lost its majority but retained power thanks to independents.

Since then she has been attacked relentlessly in contemptible, offensive terms by radio presenters, Liberal and National Party politicians and in the Murdoch press (News Ltd controls 70.5 per cent of Australia’s metropolitan newspaper market).

Even publications that favour Gillard, or at least do not openly disparage her, often seem unwilling to give her a break. Her now famous speech in parliament last October, which labelled Abbott a misogynist, became a worldwide sensation after going viral on the internet. But at home it was initially reported as her having a hide, given its background of being ostensibly in defence of the parliament’s speaker, who had sent sexist text messages.

Daily assault
Only when the rest of the world took notice was the speech given proper consideration in Australia for its content rather than context.

Women in Australia are right to be concerned about sexism, but most will never have to experience anything like the grinding, daily assault to which Gillard is subjected.

There is a glimmer of hope that things might finally be about to change. Shock jock Sattler was fired yesterday. 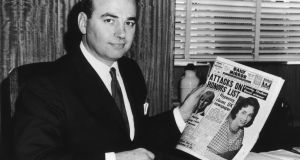 Gallery: Rupert Murdoch down through the decades