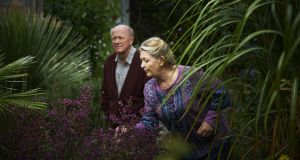 Frank McGuinness’s new play takes its title from the legendary Hanging Gardens of Babylon, one of the seven wonders of the ancient world, whose existence has never been proven. The gardens provide a structural myth to his story of a family undone by its own inventions: the stories they tell themselves and each other in order to survive a far harsher truth.

The play fits neatly into a tradition of Irish drama dominated by cruel fathers, and in The Hanging Gardens McGuinness has surely created one of the most memorable. As his ailing writer Sam Grant slips between manipulative lucidity and novelistic fantasy, we are given a glimpse of the pathology of the Irish patriarch and, in Niall Buggy’s alternately chilling and pitiful performance, a glimpse of how its roots thrive despite the poison.

From the opening moments of the play, we understand that the Grants are outsiders, but they are each of them outsiders among their own family, too: mother Jane (Barbara Brennan) prefers plants to people and has neglected her own children so her garden will flourish; eldest son Charlie (Declan Conlon) sacrifices himself for his parents and is despised for it; daughter Rachel (Cathy Belton) is so alone she is having a child just for company; the youngest Grant, Maurice (Marty Rea), has just come to terms with his sexuality but is no happier for admitting to himself (and his family) that he is gay.

However, just as he dominates the household, Sam dominates McGuinness’s imagination, and the other characters seem thinly drawn in comparison. Where Sam’s speeches offer rich subtext, the familial dialogue is clunky, often offering nothing more than exposition. The tone of the play’s second half, meanwhile, veers between horror and humour. It thrusts a simplistic and thoroughly implausible reunion upon the Grants that only confirms the cipher-like nature of their roles. However, their romantic faith in family is predictably dispelled by Sam in the play’s final moment, and director Patrick Mason exploits it for its full potential. Under Davy Cunningham’s subtly Gothic lighting design, Michael Pavelka’s lush garden set is transformed into a graveyard. It is significant that all but Sam are turned to stone; he remains a living corpse.

2 Jennifer O’Connell: The Government doesn’t trust us and it’s mutual

3 Diarmaid Ferriter: We are being infantilised on Covid-19 by an immature Government

4 David McWilliams: Why Ireland will recover faster than others