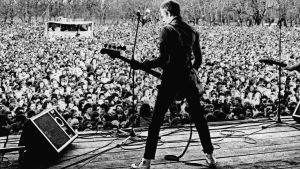 Look, I will be honest here. We approach every streaming release with an open mind, but if you are flogging a documentary about the Rock Against Racism movement then you are pushing your Doctor Marten against an already open door.

From 1976 until 1982, the organisation brought together all kinds of musicians — punk, post-punk, reggae, ska — to protest a rising swell of racism in Britain. There seemed, in those dangerous times, a real chance that the National Front could become a legitimate force in politics. RAR helped stem the tide while relaying some excellent music.

We are happy to report that Rubika Shah’s film provides a smooth, imaginative telling of an interesting story. The graphics are cool. The inevitable animations (look, it’s a 21st century doc) are kept to a discrete minimum. The still lively founding parents are talkers of the first degree. White Riot is here both to educate and to serve the nostalgists.

We begin and end with the interesting case of Jimmy Pursey. The lead singer of Sham 69, initially seen despairing at a crowd of Nazi skinheads, was no sort of racist, but his brand of working-class East End punk attracted more than a few NF apologists. His journey towards a famous RAR concert in Hackney, at which he introduced The Clash, intertwines with a clutch of related odysseys.

We hear about how rock stars of the previous generation, mucked up on coke and money, began spouting reactionary drivel. “Bowie came up with a load of crap,” one RAR founder remembers. Eric Clapton’s still jaw-dropping speech supporting Enoch Powell (if you haven’t read the full text, you will almost certainly discover it’s worse than you thought) is, as rock ‘n’ roll lore has long suggested, confirmed as the founding myth of Rock against Racism.

We hear a bit of The Gang of Four. We hear a bit more of X-Ray Spex. Archival Janet Street Porter pops up to remind us that leaving the EEC was a key plank of National Front policy. The young Prof Stuart Hall notes the then-current problem with including right-wing extremists on broadcasts for “balance”. Is any of this sounding familiar?

There are more reminders of current discontents in a film that is as much about the power of solidarity as the dangers of intolerance. Leave the last words to Sham 69: if the kids are united they will never be divided.