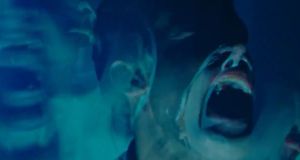 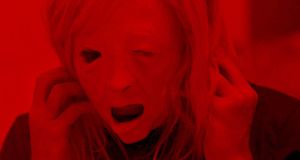 Cinematographer Karim Hussein’s striking post-Argento red-drenched visuals help make this a movie for the daring of mind, not the faint of heart.

Tasya Vos (Andrea Riseborough) is the star employee at a shadowy company that uses body-possessing biotechnology to enact corporate assassinations. The cracks begin to show after a hit leaves a young possessed black woman gunned down by police. Tasya’s supervisor (Jennifer Jason Leigh) wonders why she used a knife instead of a gun in a recent hit. A visit to her estranged husband and young son requires Tasya to rehearse her lines in order to play herself.

Her latest assignment – to take over the body of Colin Tate (Christopher Abbott), the future son-in-law of corporate rival James Parse (Sean Bean) – further jeopardises Tasya’s grasp on reality. In Colin, she finds a dangerous adversary, one who is willing to do battle to maintain his identity even after she has possessed him.

It’s impossible not to think of the writer-director’s father, David Cronenberg, and such groundbreaking body horrors as Videodrome and Existenz. (That overlap is amplified by the presence of Jennifer Jason Leigh, who headlined Existenz.)

As with those films, the younger Cronenberg plays with the interfaces between madness, method and modernity. Self is a precarious, ill-defined thing in Possessor. Never mind the technobabble: this is a new tweak on the older nightmares found in everything from James Hogg’s Confessions of a Justified Sinner to The Manchurian Candidate.

Cinematographer Karim Hussein’s striking post-Argento red-drenched visuals, Jim Williams jump-making score, subliminal edits, and old-school spurting practical effects make this one of this year’s most jarring viewing experiences. For the daring of mind, not the faint of heart.