Vivarium: In the current climate, this film feels accidentally urgent 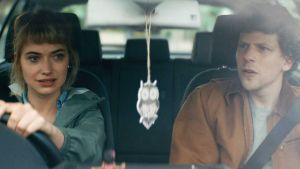 How much has changed since Lorcan Finnegan’s creepy, insidious horror premiered to deserved acclaim last year at Cannes. Never mind that. Think how much has altered since it opened the Virgin Media Dublin International Film Festival just a few long weeks ago. The opening paragraph (well, the second or third in my case) of most reviews now write themselves.

The film-makers have suggested that Vivarium – concerning a couple stranded in endless homogenous suburbia – had something to say about the housing crisis in this country, but that argument always teetered on unsteady feet.

In the nation as it existed before mid-March (Lord knows where we are now), few young couples would much complain about being able to afford a clean, sizeable property in a newly built estate. It was best to just enjoy the Twilight-Zone weirdness and leave the supposed satire unexamined.

The picture emerges on what we now call general release – streaming to a host of online platforms while cinemas remain shuttered – as millions of couples try to avoid going mad while trapped in homes with increasingly demanding children. By an extraordinary (and surely unwanted) accident, Vivarium arrives as the ultimate self-isolation movie.

Shot in Ireland, but set in a general purpose Nowhere, Vivarium begins with Gemma and Tom (Imogen Poots and Jesse Eisenberg, both excellent) visiting a creepy estate agent and driving out to view a house in an estate named Yonder.

As if auditioning for a role in one of those “boring Squaresville” songs that rock stars release to confirm their own hipness – The Jam’s Smithers-Jones, The Monkees’ Pleasant Valley Sunday – every house on every street conspires to be exactly like its neighbour.

The estate agent shows them around number nine and then vanishes into the monochrome ether. When the couple try to leave they find that every road eventually brings them back to that showhouse. Each attempt to escape has the same result. As with all the luckiest self-isolationists, they open the door each morning to find boxes of food and other essentials (including loo roll, presumably). Some time later, as tempers fray dangerously, they are delivered a baby and told: “Raise the child and be released.”

To be fair, that instruction does have some satirical purchase – there’s a point here about how children are expected to “complete” relationships – and the argument is hammered home as the child develops into a blank, needy monster with a voice like grinding gears.

Senan Jennings and Eanna Hardwicke are first rate as the younger and (the kid grows absurdly quickly) older versions of the couple’s unlovely charge.

Finnegan and his cowriter Garret Shanley make no real effort to conceal what is really going on. Early on, we encounter a dead bird apparently thrown from its nest by cuckoos. The film is called Vivarium, for heaven’s sake. If you haven’t already got some notion then you need to bone up on your fiction of the uncanny.

The source of the oddness – like the hackneyed digs at suburban life – is, however, little more than decoration on a neatly constructed exercise in creative alienation.

Featuring icy production design that makes a virtue of its own washed-out blandness, Vivarium would work just as well if no solution was offered for the slide into civilised macabre. Moving from his standard New York neurotic, Eisenberg does a convincing job of moving from frustration to a violent, active mania. Poots is better still as someone who can’t find the words to communicate her growing despair.

The final act felt, on first viewing, like a disappointing, flail around Dr Caligari’s Cabinet, but, in the current climate, the entire piece feels accidentally urgent. The empty streets are our streets. The closed-in protagonists are us. At least they only have to put up with it for 97 minutes.