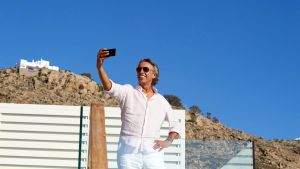 A few months ago, after an encounter with Michael Winterbottom’s latest at the Toronto International Film Festival, I was among those who thought it ingenious to play with a variation on “Greed is good”. Plenty thought Greed was “not good”. I thought Greed was “good, but not great”. You can imagine how much we enjoyed ourselves.

Anyway, the jokes in Winterbottom’s own script are no more subtle. Working with his old mate Steve Coogan, the prolific filmmaker is quite properly engaged with the increasingly obscene chasm between the poor and the super-rich.

Coogan plays an uncaring clothing magnate who has taken over a Greek island for his 60th birthday party (the domestic aesthetic is Branson, but financial practices suggest another “leading businessman” we’d better not name). Terrible celebrity lookalikes fly in to flesh out an event modelled on Ridley Scott’s Gladiator. A Greek and Bulgarian construction crew struggle to build the Coliseum in fewer than seven days.

One can reasonably expect a little fun from a cast that includes Coogan, David Mitchell, Isla Fisher and Shirley Henderson. And a little fun is what we get. Mitchell does his underachieving-basset thing as a reporter commissioned to document the blowout.

Inexplicably cast as the malign protagonist’s mother, Henderson – born within a month of Coogan – proves that she can do a convincing Irish accent while tottering like a pantomime crone (is the joke that, in Harry Potter, Henderson played a child while skirting middle age?). Decked out in comedy teeth brighter than a white dwarf, Coogan could master this sort of toad in his sleep and his adventures in amorality keeps Greed aloft during even its slackest moments.

“Are you not entertained?” Russell Crowe famously bellowed in the film mentioned above. Well, we’re diverted anyway. This may be enough to be going on with. But the satire is so exhaustingly on-the-nose throughout one wonders why Winterbottom didn’t just hand out leaflets at the tube station. He comes close in the closing credits with a series of messages that press home shocking facts about corporate abuse without injecting any more friction into the conversation.

We have not yet mentioned that Coogan is playing one Sir Richard McCreadie. The rhyme with “Greedy” suggests the sort of angry undergraduate revue that dresses its bankers up as literal fat cats with top hats and whiskers. (Speaking of cats, watch out for the Chekhovian lion over the fireplace in the opening act.) The arrival of refugees on the beach conveniently opens up another line of concern that will draw no argument from those already onboard and no interest from those committed to their hardened hearts.

No decent person wants balance here, but we deserve more creative lacerations. Greed has not an ounce of the poisonous juice that powers the TV series Succession. There is no more sympathy for the corporate monsters there – indeed, the writers work harder to strip them of redeeming features – but the series revelled indecently in convoluted linguistic cruelties. We were entertained. Indeed, we were entertained by something like the gladiatorial cruelty Russell so rapidly mastered.

Yet Greed is not without merit. The script is at its best in flashbacks showing the depressing rise of McCreadie. A corporate bandit who profits from juggling the books on tacky garment enterprises, he is a different sort of tyrant to the railway barons or newspaper emperors of old.

The script is good on how, in the wake of deregulation, the UK high street became a down-market casino for fixers with no concern for long-term value. McCreadie grew up with no silver spoon, but that does not excuse his casual ruthlessness.

We should celebrate Winterbottom’s determination to get these points made in a mainstream entertainment. Greed is good enough (sorry). But we still deserve something better.