View from the Couch: Emotions high as Katie Taylor fights the tears

Boxer is at a loss over Olympic bout, but coach Zaur Antia is still full of fighting talk 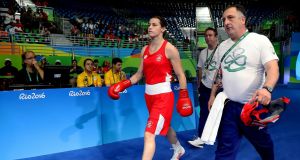 Katie Taylor makes her way to the ring with coach Zaur Antia: “Nobody can convince me that Katie lost this fight.” Photograph: Dan Sheridan/Inpho

Well, we now know what Ireland’s Rio 2016 will be remembered for: those post-competition interviews. From the giddy, zany unconfined joy of the O’Donovan brothers to the shell-shocked heartache of a broken Katie Taylor. Her interview with RTÉ after her defeat to Mira Potkonen was even harder to watch than your average bloody boxing bout. The highest of highs and the lowest of lows, we have seen it all.

No reigning champion takes the relinquishing of their crown too easily, but Taylor just seemed crushed by it all. When she struggled to find the words, any words, for 30 seconds or so after Joe Stack asked for her reaction, you kinda wanted RTÉ to say: “We’ll talk later, go see your ma.”

Taylor persevered, though, and Stack handled it sensitively; too often reporters’ eyes widen in these most vulnerable of moments and they go where they shouldn’t go, asking questions designed purely to extract rivers of tears.

“Has that invincible air gone?” Hugh Cahill had asked during the fight when Potkonen, who Taylor had always beaten in the past, showed divil a sign of fear or respect. You wondered if in those earlier encounters she was beaten before she had even entered the ring.

A bit of the wounded lion about it all after the year that was in it. Maybe, Potkonen’s confidence and aggression suggested she was all up for going in for the kill. A round each, the third looked good. “This is much more like it, vintage Taylor, Potkonen put back in her place,” said Cahill, but one of the judges saw it differently and gave it to the Finn.

You feared the worst, then. And the contrast in the atmosphere between Rio and London was beyond stark. Cahill even described the banks of empty seats as “brutal”. Standing room only in London, if you recall, the arena filled with a song about Athenry’s fields. In Rio you could hear the odd chant of “Katie” echoing around the place. Brutal was the only word.

The final round. “It’s do or die for Katie Taylor,” said Cahill, and soon after, the dreaded words. The winner . . . “in the blue corner”.

Five months ago Taylor was the reigning World, European and Olympic champion, and now every crown taken.

She made no excuses. “The Olympics is a dream of mine. I felt very well prepared coming into this first and I felt very confident. I gave it my best shot, but it just doesn’t happen sometimes. Sometimes the plans in your heart aren’t God’s plan.”

But, at a loss. “I should be beating those girls. I don’t know what to say about it, really. Those girls shouldn’t be beating me, I don’t think.”

“You owe your sport nothing,” said Stack.

“I really appreciate that,” she replied.

Head boxing coach Zaur Antia was having none of it, though. If Taylor was resigned, he was still fighting. “She won the fight! They want domination . . . boxing is hit, don’t get hit, Katie hit more, two times more than she got back! What else can you do?”

Stack wondered if the interminable wait for her first fight had an effect.

“One more time I will say to you, she did not lose the fight! She can’t kill that girl, that girl is a good boxer as well, a tough boxer . . . nobody can convince me that Katie lost this fight. Then I have no experience and I don’t know boxing! You saw her corner, they were not happy! When they raised her hand you saw how they jumped! What else do you need?”

Done and dusted, though. Only the sight of Judy Reynolds’s horsey partner Vancouver K bopping along to King of the Road in the dressage raised a smile on a not very smiley day. “If you fall out of synch with your music you lose a lot of artistic marks,” said the RTÉ commentator. And which one of us hasn’t done that?

Even the weather was against us, leaving Annalise Murphy land-bound when, first, there was no wind, and then there was too much.

1 Gordon D’Arcy: There’s more to Saracens’ success than money
2 Seán Moran: Total disregard for schools as GAA votes one way and acts in another
3 David McCann eager to begin Ireland’s U-20 Six Nations defence
4 Leona Maguire and Stephanie Meadow embark upon historic 2020 season
5 10-man Arsenal show their heart to rescue a point at Chelsea
Real news has value SUBSCRIBE
Here is your handy guide to sport on television this week