Tipping Point: Charisma not always trustworthy in world of sport 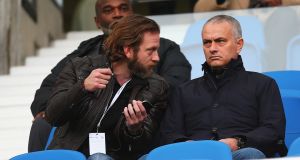 There are ‘C’ words to love or hate but the most untrustworthy must be charisma. That’s why it will be entirely refreshing if this Arsenal side ultimately goes on to win the Premier League for their defiantly uncharismatic manager.

Arsène Wenger is the antithesis of much that is ridiculous about the world’s richest league anyway but as significant as anything is how he remains a vital antidote to charisma, and perhaps most importantly of all to those so eager to believe themselves charismatic.

As a rule of thumb, it is best to view such eagerness through the prism of another ‘C’ word: just as it is contradictorily un-cool to believe yourself cool, so it is that a preparedness to trade on your supposed charisma is often the calling card of the charlatan.

José Mourinho’s managerial CV is so impressive he can hardly be accused of not knowing what he’s doing. In fact he knows precisely what he’s doing, especially when it comes to propagating the certitude that all his success is ultimately down to his self-appointed specialness.

Currently soothing his battered ego after getting the Chelsea bullet, Mourinho’s shadow nevertheless looms over every high-profile managerial job in Europe and there’s certainly no off button when it comes to reminding potential employers how there’s no show like a José show.

The Special One has even put his oar into the Portuguese presidential race, placing his substantial profile behind the splendidly named Marcelo Rebelo de Sousa. “I have a clear understanding that we need a winner, but not only a winner,” Mourinho opined last week. “We need charisma, and uniting these winning qualities and charisma, I think that’s what Portugal needs right now. I know the man and the politician. We need a charismatic winner.”

Maybe it’s a pre-requisite for the self-proclaimed charismatic to lack even basic self-awareness but it’s so blatantly obvious who Mourinho is really talking about that Rebelo might want to check the election posters to see if his image has been replaced by the King from across the water.

It’s not difficult to picture José as politician. He has the mix of insecurity, ambition and towering self-regard to know it’s all about him. From London to Milan and Madrid and back, it’s always the José show, even if some notably regrettable baggage comes in its wake too.

Yet the disgraceful incidents that have blighted Mourinho’s career have continually, and largely, been excused on the basis of charisma and success.

Pawns to be directed

No one can dispute how the tone of any organisation is set by the person in charge but Mourinho is football’s towering example of how far boorish narcissism packaged as magnetism can get you, maybe even with a tinge of unconscious homoeroticism to season things.

Seriously, if Mourinho was a minger, would he get away with half this stuff?

The most charismatic of them all, Muhammad Ali, got away with a lot being pretty, whatever ethnic claptrap he spouted. It’s Cantona and not ‘Comb-Over’ Charlton who’s the Old Trafford icon. Was Mick McCarthy’s Saipan problem ultimately that the silent repressed projected to Pretty Boy Roy and not him?

Because charisma is invisible doesn’t mean it isn’t instantly recognisable. It can be particularly potent in sport. Ali crackled with it, no matter how graceless his behaviour could get. Irish sport, including Keane, has been blessed with truly charismatic figures too, usually those oblivious to, or completely disinterested in, pondering the subject in the first place.

Yet its fingerprints are all over many sports. Even the proudly amateur GAA continues to be in thrall to the idea of the individual coaching mastermind at the top but it is only aping what has been going on in football for decades, from the cult of Shankly through to Clough and Ferguson.

However, just as it was hard to ever mistake such men for humble, the idea of determinedly wrapping their club’s dreams and ambitions in a cloak of their own cult would have been as alien to them as it seems to second nature to so many managers now.

Maybe it’s a by-product of an overwhelming media world that likes its big themes parsed down into an instantly recognisable figure but plenty are playing this single-string banjo for all its worth, even if Mourinho remains the virtuoso.

It’s hard to picture Wenger with a banjo. Apparently he’s more of a reggae man. That’s quite hard to picture too. That there remains an air of personal mystery around a patently bright man who has guided Arsenal for 20 years through a maelstrom of fads and fashions indicates a guiding principle that it is ultimately all about players, not any carefully manipulated projection of the sideline self.

It’s a view summed up during the run-up to the weekend Chelsea clash when he was invited to comment on the absence of his old charismatic nemesis. “Because of the quality of the players it will be an intense battle,” he said. “No matter the manager on the bench.”

Proof maybe that one ‘C’ word impossible to manipulate is class.