After just 20 years of service, some American venues are already considered obsolete 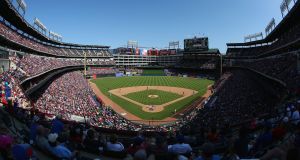 A general view of play as the Texas Rangers played host to the Los Angeles Angels at Globe Life Park in Arlington earlier this month. Photo: Getty

This column is a sucker for an old stadium. We once strode around an abandoned Tiger Stadium in Detroit, nodding to the ghosts of Cobb and Ruth as a bemused security guard looked on. We prefer seats that are close to the action and terracing closer; atmosphere generated by singing fans rather than a deafening PA. Yes, we secretly loved the old Lansdowne Road. So when we hear of stadiums being replaced after barely 20 years of service our eyebrow will be raised, quizzically.

On Friday in north Texas the city of Arlington and the Texas Rangers announced that a new stadium would be built to replace Globe Life Park, itself opened in 1994. This at the same time as the Atlanta Braves are building a new ballpark to replace their home at Turner Field, opened in 1997 having originally served as the Olympic Stadium for the 1996 games. Is this what stadium lifespan has become?

Andrew Zimbalist is Professor of Economics at Smith College and author of books on the folly of bidding for the Olympics or the Fifa World Cup as well as the differing economic systems of sports in Europe and the US. “To somebody who hasn’t studied the economics of sports in the United States closely, it looks pretty weird.” said Zimbalist. “These are stadiums that by most standards are still new stadiums - why do they need a new one?”

The current location is not great for the Braves, Zimbalist explained. “It’s in a part of downtown Atlanta that’s not all that central to the business district, it doesn’t have good public transportation access to it, and it doesn’t have good parking access to it. So they haven’t been able to maximise its revenues from the stadium. And so they got this deal from Cobb County to the north of Atlanta that offers to give them the land and pay for most of a new stadium. They jumped at the opportunity.”

Moving is one thing, but in Texas Arlington needed to keep their tenants happy. Dallas is nearby and part of the same metropolitan area. It’s a seller’s market. “You have promotion-relegation systems; those are open systems. We have closed leagues.” said Zimbalist. “You don’t get the phenomenon of having five or six premier league teams in a city like New York that you have in London.” As a result of this “the teams have a lot of bargaining leverage and a result of that they get public subsidies to build these stadiums, and the average public subsidy for building is somewhere around 55 or 60 per cent.” The new stadium, costing the guts of a billion dollars, will have a retractable roof, helping defeat the crushing Texas heat.

The late 1990s and early 2000s saw a great stadium boom in the US. Wondrous things with modern facilities, but an old-fashioned feel. Not for them the multi-sport wizardry of New York’s Shea Stadium or Mile High in Denver where concrete mountains pirouetted to make room for another sport’s particular needs; instead the new were dedicated to one sport and its heritage. Odd shaped walls and nooks and crannies; a nod to the past but with the craft beers and endless food options to satisfy the demand of the modern entertainment dollar.

Zimbalist explained that going back to World War II the typical pattern in the US has been that there are stadium cycles that last about 30 years. Architectural historian Simon Inglis said such shorter stadium lifespans are very much an American phenomenon. “Most stadiums you anticipate are going to have a lifespan of about 50 years but in practice many of them have lifespans of 70 years. In America the pressure is much greater . . . and their lifespan is much shorter.”

Romantic exceptions aside, stadiums have a natural shelf-life. “As a general rule stadiums become economically obsolete.” said Zimbalist. From the point of view of stadium design too, said Inglis: “You could almost say that most stadiums are pretty much obsolete by the time they’ve opened because of the time it takes to plan them. You can allow a good six or seven year gestation period from conception to opening, and that’s not bad going.”

Such pacey obsolescence is disappointing if you are one of those who sometimes likes to think of sport in terms of its ghosts, and nod to them on the field below.