From the Bernabeu to old Burnley, United’s record signing is in for a culture shock 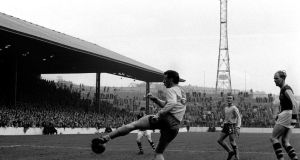 Burnley host Chelsea in a Division One game from Turf Moor, Burnley circa 1965. The club have been playing on this piece of land since February 1883. Photograph: Bob Thomas/Getty

Angel Di Maria’s last appearance for Real Madrid came in the first leg of the Spanish Super Cup against neighbours Atletico almost a fortnight ago.

This was the all-white heat of the Bernabeu, the renewal of a local derby that just happened to be a repeat of the Champions League final in May in Lisbon.

That was a game in which Di Maria played all 120 minutes and was named Uefa’s man-of the-match. It was a long, long way from Burnley.

Since then, Di Maria has played in an Argentina team that reached the World Cup final, though he was injured, and, at €75 million, become the sixth most expensive footballer in the history of the sport.

The 26-year-old Argentinian joined Manchester United, obliterating the British transfer record. He cost United more than Juan Mata and Robin van Persie combined and was placed in front of a Chevrolet by a United marketing man to celebrate the move. The message was: speed, luxury, expense.

The message was not: Turf Moor.

As Simon Inglis put it in his classic 1983 work, The Football Grounds of Great Britain – “Turf Moor is at sounds, a patch of turf amid moors.”

But that is where Di Maria’s United career begins, this lunchtime. Two parties travelling in different orbits a few months ago collide in Lancashire. Fortunately for Di Maria, they know about history there; Burnley have been playing on this piece of land since February 1883.

The stadium has changed a bit since 1883, even from 1983, but it still contains the feel of old England. United felt that ancient force on their last visit, this month in 2009, when Burnley were last in the Premier League. The Clarets won 1-0 courtesy of a Robbie Blake shot against a United team that had Ben Foster in goal and Michael Owen up front. Gary Neville was called from a bench that also had Darron Gibson on it.

After their milestone 4-0 defeat to third division Milton Keynes – the ‘Dons’ belong to Wimbledon, lest we forget – on Tuesday night, one of many repeated descriptions of United was ‘unrecognisable’.

But this has been the case before, as the last appearance at Turf Moor shows, and what matters now is the recovery to something recognisable as Manchester United. For Louis van Gaal’s sake, that recovery must start over the moors and for the club’s sake, it could do with Di Maria leading it.

It is reasonable to assume that, growing up in Rosario, alongside Lionel Messi, Di Maria did not hear many bulletins from the Calder Valley. But Burnley, a small town, has long punched above its weight and most of the greats of English football have been to Turf Moor at some point in their careers, some of them United No. 7s.

It may not be the Bernabeu but Turf Moor is a place to make a name.

So while Di Maria is new, United need him to be vintage. What he will notice is that there will be no Cristiano Ronaldo or Gareth Bale to look to when in possession, nor will Di Maria have Xabi Alonso behind him to set a passing tempo.

He is joining a team and a club in flux and, while Burnley have a miniscule budget by comparison – their record transfer fee is the €3.78 million paid to Hibs for Steven Fletcher five years ago – and are favourites to be relegated, Sean Dyche’s team showed enough in the early exchanges against Chelsea to say they will not be overawed by the presence of British football’s most expensive ever player on the teamsheet.

Yet in a troubled month for the club, Di Maria’s arrival should alter the Old Trafford atmosphere. It is possible to see United winning at Turf Moor with him, in a way, that without him, it was not. That there could be angst about Manchester United visiting Burnley reveals the scale of their decline.

Not that Burnley will be accommodating. They also seek balance. The club knows and values its vintage but it wants to be new, too. But to do so, Burnley will not break the bank – Di Maria’s fee is the equivalent of the Premier League parachute payment and if Burnley already possess a promotion plan for next season in the Championship, who could blame them?

From the Bernabeu to Burnley, Angel Di Maria will land from a different planet in football’s moneyed stratosphere. How he and United hope old Turf Moor does not bring him down to earth.

1 Owen Doyle: Ireland suffered from officiating of the breakdown
2 Gerry Thornley: Ireland don’t want to box themselves into a corner
3 No further players to be called up to Ireland squad to face Georgia
4 Thomas Galligan and Cavan raring to meet Dublin in Croke Park
5 Kevin McStay: Maybe a knockout All-Ireland Championship is the long-term solution?
Real news has value SUBSCRIBE
Crossword Get access to over 6,000 interactive crosswords