Tottenham well placed after draw away to Fiorentina 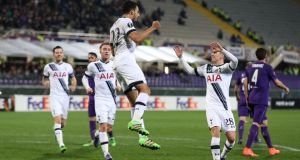 Tottenham remain in the hunt for three trophies this season after leaving Italy with a hard-fought draw in their Europa League round of 32 tie against Fiorentina.

Nacer Chadli had put Spurs ahead with a dubious penalty before Federico Bernardeschi’s deflected second-half effort sealed a closely-contested 1-1 stalemate – which leaves both sides fancying their chances in the return leg next week.

Dele Alli was again inspirational, especially in the opening half, but he was also lucky to avoid a red card for a kick aimed at a Fiorentina defender.

In the build-up to this tie, Mauricio Pochettino insisted he still had designs on winning the Europa League as well as competing for the FA Cup and Premier League back home.

But, in making seven changes from the weekend win over Manchester City which left them second in the table, the Spurs head coach was putting faith in his squad to deliver when called upon.

Ryan Mason captained the side on his first start since November, while Michel Vorm deputised for injured skipper Hugo Lloris in goal.

Tottenham had been knocked out here in Florence 12 months ago with another much-changed side ahead of a Capital One Cup final against Chelsea just three days later.

It was a subdued start from both sides as neither goalkeeper was worked inside the opening 25 minutes until Christian Eriksen rasped a shot which Fiorentina’s Ciprian Tatarusanu had to push behind for a corner.

Alli was booked for a petulant kick on Nenad Tomovic after he had already fouled the Viola defender on the touchline, with several Fiorentina players crowding referee Felix Zwayer.

The hosts should have taken the lead just after the half-hour mark as Josip Ilicic’s cross fell to Bernardeschi six yards out, only for the winger to fluff his lines with Mauro Zarate stabbing the loose ball wide.

And they were made to pay for squandering a good chance as Spurs were awarded a penalty from their next attack as Ben Davies went down in the box after minimal contact from Tomovic.

Chadli, starting as the main striker with Kane only amongst the substitutes, stood up and confidently stroked the resulting spot-kick past Tatarusanu.

Zarate wasted another decent chance as Jakub Blaszczykowski’s cross was cleared into the path of the former West Ham man, who fired over the bar just before the break.

Spurs thought they had doubled their advantage moments after the restart but Son Heung-min was offside as he dived to head in Eriksen’s free-kick.

Mousa Dembele had been introduced by Pochettino at the interval and he set Chadli scampering away in search of a second, only for Tatarusanu to turn his angled effort behind.

But it was Fiorentina who would strike next as Bernardeschi let fly from long range, seeing his effort loop in over Vorm due to an unwitting deflection off Mason.

Pochettino turned to Kane with a little more than 20 minutes remaining as Son made way for the man who has already hit 19 goals for Spurs this season.

However, the England international could not add to that, with Fiorentina defender Gonzalo Rodriguez coming closest to producing a winner ahead of the return meeting at White Hart Lane.

1 Andy Farrell ticking all the boxes in advance of England showdown
2 Players impressed with Bono’s Irish pride and desire
3 Ireland wary of Peyper calling the tune as they head for Twickenham
4 David Brady says he has witnessed the illegal payments of GAA managers
5 Owen Doyle: Day of the jackal may be coming to an end
Real news has value SUBSCRIBE
Crossword Get access to over 6,000 interactive crosswords