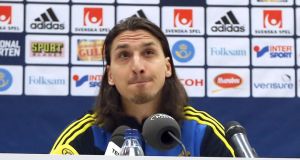 Ireland ’s ability to cope with the attacking threat of Zlatan Ibrahimovic may be a major concern for Giovanni Trapattoni this evening but he can take some consolation from the fact that his opposite number, Erik Hamren, has defensive issues of his own as he prepares for this evening’s Group C encounter.

The Swedes have conceded nine goals in their last three games; something that would most likely be considered a full blown crisis in these parts were it not for the quality of the opposition involved and the fact that they also managed to score 10.

“We had some problems in the defence,” acknowledges Hamren, an amiable 55 year-old who has been coaching for almost 40 years, in English after having clearly spent much of the previous 20 minutes at yesterday’s pre match press addressing precisely the same issue in his native tongue. “We conceded too many goals so I’m not satisfied with that. We’re still not where I want us to be but,” he points out, “we have also met the number two, three and six in the world (actually the three teams: Germany, Argentina and England, are currently ranked two, three and four) so there have been some challenges too.”

Two have been met in remarkable fashion with the Swedes coming from behind to beat England comprehensively in a home friendly and, rather more impressively, battling back from four down to draw a qualifier in Berlin.

Ibrahimovic was a key player both times – he got all four goals against the English including an astonishing long range, overhead effort as well as the one that that kick started the revival against Joachim Loew ’s men – but Trapattoni will doubtless point to the opportunities too while hoping that his own players are good enough to exploit them.

The Swedes, it might be argued, are suffering first and foremost from the loss of Olof Mellberg from the heart of their defence with the vastly experienced 35 year-old the only member of Hamren’s squad who could rival its famous striker in terms of stature, even if he too fell short of being his friend’s equal when it came to ability.

“It’s a nice feeling to go 4-0 down to Germany and still get a point,” observes Jonas Olsson, the West Brom centre back who used to partner Mellberg but is now, in his absence, the senior member of the back four. “And that’s part of what we are now; that we are playing more attacking open football. But the danger with that is that we also open ourselves to letting in more goals.”

Olsson, Celtic ’s Mikael Lustig and Andreas Granqvist all pretty much pick themelves given what is available to the hosts for this game but none stands out at this level while many believe the likely selection of Anderlecht ’s Behrang Safari over Oscar Wendt of Borussia Monchengladbach, is a miscalculation by the generally astute Hamren.

The coach prefers to focus on practice rather than personnel; saying that the squad has been working on its positional play in training but, like his Italian opposite number, lamenting the fact that he has so little time to get things right in the run up to games like this.

“We need to do better with that,” he says “but the passing is so quick now that you need to be better too in the one against one situations (marking) because if you are not then you will have problems against the really good teams.”

Whether he counts Ireland as one of them is left hanging in the air somewhat but there is little doubt that Hamren is concerned by the potential for tonight’s visitors to cause Andreas Isaksson problems from a set piece or two.

“We have worked a lot about defending set-pieces,” confirms Olsson. “We haven’t changed anything; we have just focused on it because it has to be correct from the beginning. We have worked on it in the last few days because it is a strength for Ireland.”

Of Ireland’s 13 most recent goals, indeed, seven have come to one extent of another from corners and free-kicks with an eighth scored by Robbie Keane from the penalty spot. Trapattoni insists that there is a threat too from his side’s “offensive actions” but either way Sweden ’s defensive shortcomings still look to be Keane and co.’s best route forward.