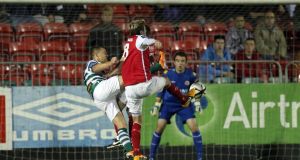 There was a great start to this match with both sides getting stuck in from the opening whistle.

St Pat’s forced a series of corners in quick succession in the opening 10 minutes but each was dealt with adequately by the Rovers defence.

Then a great ball from St Pat’s defender Kenny Browne on 11 minutes found Conan Byrne on the wing but his cross into the box was too quick for the advancing Christy Fagan, who couldn’t get into the box in time to meet the ball.

Finn rose unchallenged to meet a Conor Powell cross and directed an excellent angled header beyond the reach of St Pat’s goalkeeper Brendan Clarke and into the far top corner.

St Pat’s suffered a setback on 23 minutes when Killian Brennan picked up an injury and was replaced by John Russell, and they found themselves further behind 10 minutes later.

The home defence failed to clear the ball following a good Rovers move on the right of the box involving Powell and Ken Oman and it ended with Robinson striking the ball past Clarke for Rovers’ second goal of the night.

Limped off injured
St Pat’s were forced into changing their game plan again on 39 minutes when Shane McFaul limped off injured, with Chris Forrester being introduced in his place.

Rovers goalkeeper Barry Murphy had a quiet opening 45 minutes but was called into action on 55 minutes to make a fantastic save from Ger O’Brien, who shot from 25 yards out following a short Byrne free-kick. The ball was cleared to Pat’s Ian Bermingham, who fired high and wide.

Gary McCabe nearly added a third for Rovers on 65 minutes with a fine looping strike which looked to be dropping over Clarke and into the net but the goalkeeper managed to get a hand to the ball and push it over the bar.