Tributes pour in following death of Mark Farren at 33 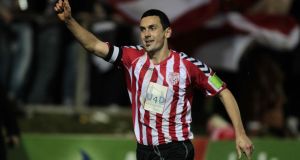 Friends, former teammates, managers, officials and the FAI have paid tribute to Mark Farren, the record-breaking Derry City striker, who died, aged 33, after a long battle with cancer.

“He was just a very unassuming, gentle soul; quiet and understated,” said Stephen Kenny, City’s manager when Farren was at his very best. “He certainly didn’t seek the limelight, that’s for sure.Everything about him was under the radar, except for his finishing. Mark was just a tremendous person to be around.

“He was voted by his fellow professionals as the best player in the country in 2005. He had hamstring problems before that, but he had an incredible season in 2005.

“The following year he scored in the FAI Cup final and he scored a penalty in the League Cup final shootout. We finished the league away to Waterford, away to St Pat’s and at home to a good Cork City team.

Gutted to hear news of the death of my former teammate mark farren, great player, even better man, prayers are with his family, RIP buddy

It is with great sadness that we learn this morning of the passing of the clubs all-time top goal scorer Mark Farren https://t.co/BxBpsow9mY

“We were on our knees at that stage but we won the three games 1-0, with Mark scoring the winner in all of them.”

His former teammate Barry Molloy recalled the club’s successful promotion campaign that Farren, who scored a career total of 114 goals in 209 appearances for City, played such a major part in after the initial diagnosis of his brain tumour.

“That year he scored over 20 goals,” he recalled. “For someone to play a full season with that in the back of your head . . . he scored the winning goal to get us back in the premier Division. It just shows you the character of the man. He is loved by so many people.

“‘Legend’ and ‘hero’ get thrown out too often but those two words are definitely relevant for Mark.”

He is survived by his wife, Terri-Louise.