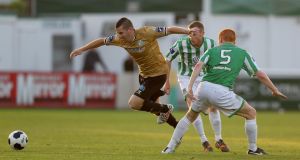 A third goal in four games from Dean Kelly led Shamrock Rovers back up to third place in the table in front of Republic of Ireland manager Martin O’Neill at the Carlisle Grounds.

Trevor Croly will be pleased his side bounced back from last week’s abject home display in losing to Dundalk to put this game to bed inside 15 second -half minutes.

Jake Kelly has been Bray’s only real goal threat during their desperately poor run which has now seen them take just one point from their last eight league games.

And he really should have given them the lead on 12 minutes; latching onto David Cassidy’s through ball to outsmart the defence only to ruin it all by drilling his shot wide.

Kelly caused Rovers problems again on 25 minutes, working a one-two with Cassidy before visiting skipper Conor Kenna got back to nick the ball off his toe.

While Rovers enjoyed much of the possession, Bray continued to make the chances. Three minutes before half-time Cassidy’s corner picked out midfielder Graham Kelly whose first-time shot was over the bar.

Rovers played with far more purpose after the resumption and led on 57 minutes.

Under pressure from Jason McGuinness, Bray’s Dave Scully merely succeeded in heading a Sean O’Connor cross against his own post and Kelly pounced to fire home the rebound.

Six minutes later McGuinness got his head to the ball first from a Gary McCabe corner to glance the ball to the net for Rovers’ second goal.

Shane Robinson added the third when forcing the ball home from close range, this time from Simon Madden’s low delivery from the right.