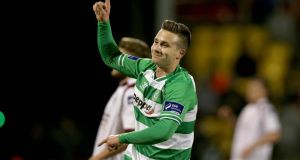 Substitute Brandon Miele rowed in with a third in stoppage time as Pat Fenlon’s side eased to victory over 10-man Galway.

A blunder from Galway keeper Conor Winn gifted Rovers the lead on 18 minutes. Coming to gather Madden’s ball over the top, he hesitated on realising he was on the edge of his area, and that allowed Gavin Brennan to nip in and set up Drennan for a tap-in.

There was more energy to Rovers on the resumption, with Keith Fahey making a run to the end line before drilling the ball across the goal and wide.

Winn then made a point-blank save from a Ryan Brennan header from a Fahey free kick on 55 minutes.

Drennan’s follow-up shot appeared to strike a Galway arm, but referee Rob Rogers waved play on. But Rovers pressure told on 68 minutes. David O’Connor got forward from left back to pull the ball back from the end line for Drennan, whose shot found the net with the help of a deflection.

Winn then deprived Drennan of his hat-trick two minutes later with a fine one-handed save from the striker’s angled shot.

Galway’s indiscipline struck again on 76 minutes as Marc Ludden was sent off – Galway’s fourth red of the season – after he received a second yellow for tripping Madden.

Substitute Miele added the gloss for Rovers a minute into stoppage time, racing onto Drennan’s pass to rifle to the top of the net for a goal on his league debut.