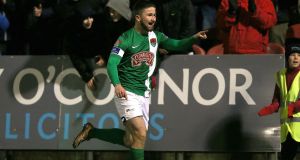 A second-half brace from new striker Seán Maguire got the runners-up of the last two seasons, Cork City, off to a winning start at Turner’s Cross on Friday night.

Having scored in the 2-0 President’s Cup win over Dundalk last week, centre forward Maguire continued his good scoring form, with two similar goals in the 53rd and 63rd minutes enough to secure the points.

On each occasion, a defender was the source of the assist, first right back Eoghan O’Connell with a lovely threaded ball and then centre half Kenny Browne with a clearance that the striker was able to latch on to after it evaded Anto Murphy. While the angle was against him on each occasion, Maguire was able to conjure shots to beat Dean Delany.

His intervention was welcome on a night not suited to the kind of expansive, attacking football that City manager John Caulfied has stated that he wants his side to play as they attempt to dethrone Dundalk.

While new signing Greg Bolger showed some nice touches in midfield, the cold, biting wind made life difficult for both sides and the pitch, pock-marked with sand in a bid to protect if after a sustained run of bad weather, didn’t always allow for the ball to run truly.

The first half saw the sides cancel each other out for the most part, with Maguire flashing a shot across goal early on while at the other end Ismahil Akinade’s trickery resulted in yellow cards for City’s Kenny Browne and John Dunleavy.

Proper attempts were few and far between, but the opener arrived within eight minutes of the restart, Maguire poking home from close range, and it seemed to provide City with greater impetus. They assumed superiority and the second strike 10 minutes later made them comfortable.

Maguire didn’t really get a chance of a hat-trick, but it scarcely mattered, while Bohs finished with 10 men after Roberto Lopes received a second yellow card late on.

Newly promoted Finn Harps chalked up only their second ever league win over Derry City before a crowd of over 4,000 at Finn Park.

Harps’ aim this season is to stay up and this was a great tonic on day one.

Derry nearly took the lead in the opening minute when Gareth McGlynn crossed deep into the box but Jordan Allan failed to connect properly with a header.

The visitors were clearly on top early on and McGynn then had an effort blocked while Aaron McEneff blazed a shot over from 20 yards.

City missed a golden opportunity to take the lead on 41 minutes when Allan headed a McGlynn corner over from close range.

But Harps snatched the lead on the stroke of half-time when David Scully rose to connect with a left-wing cross and send the ball past a despairing Gerard Doherty.

Derry failed to really threaten Harps in the third quarter.

And Harps then pounced with a second on 75 minutes with former Derry player Ryan Curran bursting though to score after the visitors lost possession near half-way.

Rory Patterson pulled one back on 90 minutes for City but Harps held on.

This was the 60th competitive meeting between the two sides since Derry entered the League of Ireland back in 1985 – with Harps having only won five times previously.

There was a minute’s applause before the start of the game in memory of the late Mark Farren,who hailed from Donegal, and who was a legend at Derry City.

He passed away last month having lost a brave battle against cancer.

This was Harps’ first game in the Premier Division since 2008.

Goals early and late from Kevin O’Connor and Josh O’Hanlon ensured there was to no happy beginning to life in the Premier Division for Wexford Youths.

Their young manager Shane Keegan had stressed in pre-season that he hoped to be defensively more solid this season, so he won’t have been pleased to have seen his side fall behind to a soft goal after just six minutes of their debut in the top flight.

His charges were caught napping from a Longford throw-in on the left which picked out O’Connor. The Town midfielder cut past his marker to make time and space for himself to drill a low drive to the bottom near corner of the Youths’ captain Graham Doyle’s net.

Wexford heads didn’t drop, though, as they recovered from that early setback to press Longford for a good spells, almost levelling 10 minutes later.

Jonny Bonner fed Eric Molloy who turned smartly inside the area to bring an agile diving save from Paul Skinner.

Kenny was there again to loop a header just over the top after Skinner flapped at Craig McCabe’s long throw.

But Youths had a right let off on 26 minutes as they avoided falling further behind. A David O’Sullivan shot ricocheted back off Gary Delaney to fall for Kaleem Simon whose deflected effort trickled past a post for a corner.

Youths chased the game hard from the restart with Molloy shooting over before Danny Furlong glanced a header from Aidan Friel’s corner narrowly wide.

Furlong, last season’s 30-goal top scorer, was then left thumping the ground in frustration on 64 minutes as he blazed over the top after a sweeping moved cut Longford open.

Furlong did have the ball in the Longford net on 89 minutes, but had been well flagged for offside.

1 TV View: Roy Keane but Daragh’s keener as Late Late fails to shoot the lights out
2 Ireland Slam England at the Gardens to open up Grand ambitions
3 ‘Manchester United are lucky to have you’: Klopp responds to Donegal schoolboy’s letter
4 Solskjær backs Martial to get 20 goals for Manchester United for first time
5 Eddie Jones: back three will deal with Irish aerial threat
Real news has value SUBSCRIBE