Honours even after late drama at Turner’s Cross 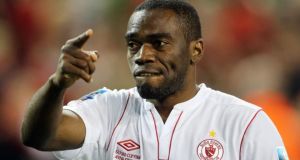 Joseph Ndo’s 88th-minute corner caused confusion in the home area and went in off a defender.

It was honours even after late drama at Turner’s Cross last night.The game looked to heading for a scoreless draw when Joseph Ndo’s 88th-minute corner caused confusion in the home area and Kieran Djilali scored.

In the final minute of injury-time, however, Cork’s Mark O’Sullivan went down under a Kalen Spillane challenge in the area and Billy Dennehy converted the penalty.

Before that, both sides certainly had chances to win, especially in the first half, which had seven minutes of injury time due a stoppage after Cork’s Garry Buckley shipped a heavy challenge from Sligo goalkeeper Gary Rogers early on.

When play resumed, Aaron Greene and Danny Ledwith were bright for the visitors. Ledwith drew a good save from Mark McNulty with a volley from a Greene cross and then Greene twice went close.

At the other end, Mark O’Sullivan wasted a good chance for the home side after he had done well to win a McNulty clearance, while shortly before half-time only good Alan Keane defending stopped Liam Kearney getting to Brian Lenihan’s cross.

The second half was not as action-packed but was still relatively even. Greene had the best chance 10 minutes in when he was put through only to scuff his shot.

With just under 20 minutes left, a Brian Lenihan corner went right across goal when any touch would have done and a minute later Joseph Ndo did brilliantly to keep out an O’Sullivan header, again Lenihan with the delivery.