Galway lose a man but gain a point against Bohemians

Dinny Corcoran on target again for home side 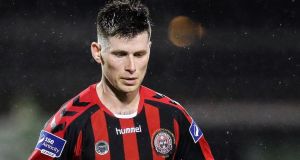 Bohemians’ Dinny Corcoran was on the scoresheet again and Galway United finished with 10 men at Dalymount Park as their search for a first win of the season continued.

Galway started the better, working Shane Supple as early as the second minute as the Bohemians’ goalkeeper pushed Ronan Murray’s stinging drive out for a corner.

The visitors troubled Bohemians again minutes later. Kevin Devaney’s deep cross from the left was knocked down by Gary Shanahan and Murray got in a shot on the turn that flew over the bar.

Galway’s promising start counted for nothing, though, as Bohemians took the lead against the run of play from their second corner of the game on 16 minutes.

It was all about the delivery from Lorcan Fitzgerald as his wind-assisted in-swinger was flicked to the net off the head of in-form striker Corcoran for his fifth goal of the season.

Another Fitzgerald corner on 36 minutes almost saw Bohemians double their lead. This time the ball arrived at the back post where Dan Byrne’s scrambled effort came back off the post.

But four minutes later Galway were level. Supple was yellow-carded for a foul on Murray just outside his area. Murray hammered the resulting free kick low through a defender’s legs to the far corner of the net.

Despite the wind at their backs, Galway struggled to create chances in a dreadfully poor second half.

The Connacht side were then reduced to 10 men on 69 minutes when midfielder Alex Byrne was dismissed for a second booking after taking down Fitzgerald.