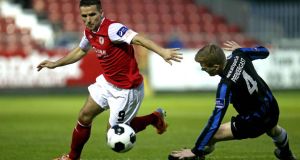 Helped by a brace of goals from Christy Fagan, champions St Patrick’s Athletic maintained their resurgence with a fifth consecutive win to move up to second in the table – a mere goal behind leaders Cork City.

Conversely, a 10th successive defeat means that Athlone have now had the worst start to a League of Ireland season since 1935. It may have been a little different, however, if the visitors hadn’t wasted a glorious chance of the lead after just 50 seconds.

Referee Paul McLaughlin played a good advantage to allow Mark Hughes thread the ball through for Philly Gorman but he curled his shot wide.

St Patrick’s responded with the Athlone goal having a double let-off from a corner minutes later as Sean Hoare and Chris Forrester, in turn, had efforts blocked by some frantic defending.

But there was little the Athlone rearguard could do on 12 minutes as Keith Fahey sent James Chambers clean through on goal with a sublime pass with the outside of his right boot. Fellow midfielder Chambers didn’t waste the opportunity, shooting past Craig Sexton low into the far corner of the net.

As they’d done earlier, though, St Patrick’s gifted Athlone another opening on goal on 19 minutes which should have brought an equaliser. Derek Prendergast’s ball ran through for Kealan Dillon who, as with Gorman, failed to hit the target.

That was about as good as it would get for Mick Cooke’s side as Sexton was forced into good stops from Lee Lynch and Ger O’Brien before St. Patrick’s doubled their lead with a delightful goal four minutes before half-time.

Athlone kept plugging away and should have pulled a goal back on 67 minutes with Prendergast shooting over from Byrne’s fine through ball. But a calamitous error by Sexton ended the game as a contest on 75 minutes when he completely missed his kick to allow Lee Lynch to walk the ball to the net and Fagan completed the scoring with a a fine finish two minutes later.
ST PATRICK’S ATHLETIC: Clarke; O’Brien, Hoare, Browne, Bermingham; Fahey (Bolger, 69); Byrne (McCormack, 80), Chambers (Brennan, 78), Lynch, Forrester; Fagan.
ATHLONE TOWN: Sexton; McMahon, A. Byrne, Prendergast, Clancy; Dillon (Sweeney, 73), Hughes, O’Brien, Rusk; S. Brennan (Marks, 54); Gorman.
Referee: P McLaughlin. Att: 1,257