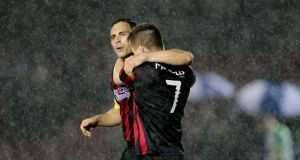 Cork City never looked overly troubled as they joined Dundalk at the top of the SSE Airtricity League Premier Division with a mostly routine victory over Drogheda United at Turner’s Cross on Friday night.

An early goal from captain John Dunleavy – his first of the season, in the week he signed a new contract – set the home side on their way and when Mark O’Sullivan doubled the lead in the 48th minute, it sealed the outcome, even at such an early stage.

While Drogheda did get a goal back through sub Declan O’Brien in the 81st minute, the Louth side never looked like doing their neighbours a big favour.

It wasn’t a vintage Cork performance but of late they seem to have mastered the art of efficiency in just doing enough.

Dunleavy’s goal, a sweeping finish from John O’Flynn’s pass, was their first real attack and for the rest of the half Drogheda had more goal attempts, but none of them were clear-cut.

Without Colin Healy and Gearoid Morrissey, Cork didn’t always boss midfield, but less than two minutes into the second half it was 2-0. John Kavanagh’s clearance evaded Ciarán McGuigan’s jump, allowing O’Sullivan to latch on to the loose ball and he held off Alan McNally before finishing smartly from a tight angle.

O’Sullivan went close with a header after that, while the Dennehy brothers, Darren and Billy, both had chances too.

When Drogheda’s Gavin Brennan was sent off for a lunge on Cork sub Josh O’Shea, that looked to have ended their hopes, but O’Brien’s fine run and finish got them back into the game.

Kieran Djilali scored twice in the second half to earn Limerick full points in a game which they should have wrapped up in the first half but instead were only on level terms at the interval at Thomond Park.

The defeat makes matters extremely difficult for Athlone Town if they are to avoid relegation and their second goal came only as the first of three added minutes were being played at the finish of a disappointing contest which had an exciting last five minutes.

Limerick needed only seven minutes to go in front when Rory Gaffney put the ball in a net left unprotected by Ryan Coulter who moved off his line in a bid to avert the danger.

Limerick went back in front after 56 minutes when Gaffney’s shot was saved but the ball broke to Djilali and nine minutes later he beat three defenders before again beating Coulter.

Alan Sweeney fluffed a chance for the visitors who pulled a goal back through Alan Byrne but just at the end Gaffney had his second to clinch it for Limerick.

A brace of goals each from Gary Shaw and Don Cowan sent Longford Town back to the Premier Division in style at the City Calling Stadium.

Tony Cousins’s midlanders dominated from the start to win the game within 26 minutes to clinch a first senior title for the club and end their seven years in the First Division.

Town started on the front foot and got the early lead they would have wanted.

A mistake by O’Malley gifted Longford their second goal on 19 minutes when the 20-year-old goalkeeper dropped Gorman’s corner for Cowan to stab the loose ball home.

It was 3-0, and all over, on 26 minutes as Rovers again failed to defend a Gorman corner. Skipper Stephen Rice’s sliced shot fell kindly for Shaw who shot home off the butt of O’Malley’s right-hand post for his 13th league goal of the season.

Cowan got his second two minutes after the break, scooping home after O’Malley parried his initial shot following a Tom Morris cross.

Leading scorer David O’Sullivan ended his six-game goal drought to add the fifth goal – his 20th of the season – on 61 minutes, heading home from Cowan’s cross after O’Malley parried his initial shot.