Cork aiming to take title pursuit down to the final day

Victory over Bohemians essential to keep the pressure on leaders Dundalk 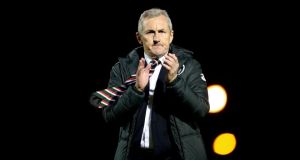 Cork manager John Caulfield: “We’ll be hoping that we can play well, because we will need to play well to beat them.” Photo: James Crombie/Inpho

Cork City can expect their biggest crowd of the season at Turner’s Cross tonight for what looks like a must-win game against Bohemians.

A point behind leaders Dundalk, Cork, who are on a run of five league wins, won’t want to lose now as they strive for a title showdown at Oriel Park next Friday. However they haven’t beaten Bohemians in four previous meetings this season.

If they do slip up, victory for Dundalk at Bray Wanderers would win them the league tonight.

“We need to play with a really high intensity and be up for the game from the start,” said Cork City manager John Caulfield.

“We’re up against a team that we haven’t beaten yet this season. They’ve caused us a few problems, but we had a similar situation with Sligo and we beat them a couple of weeks ago, so we’ll be hoping that we can play well, because we will need to play well to beat them.”

“The situation for us over the last six or seven weeks has been that we’ve had to keep the pressure on and see if we could bring it to the last game of the season,” said Caulfield.

“We know if we don’t take the points then it won’t go to the last game. We know that if we do, then it will and that is all you can ask for.”

With next week in mind, Cork midfielder Gearóid Morrissey is unlikely to be risked as he recovers from a knee ligament injury. Josh O’Shea is also a doubt with an ankle injury while Danny Morrissey and Michael Rafter remain out.

Cork will be encouraged by the fact that Bohemians travel with a depleted side. Key central defender Aidan Price and winger Paddy Kavanagh are suspended while Derek Pender and Dan Byrne are injured. Roberto Lopes is unavailable due to exams.

“It’s a great honour to win player of the month, not many defenders win it. I’m absolutely delighted,” said the 26-year-old Massey. “The most important thing now is just to focus on our own game and not worry about anyone else. We know we play the best football in the league.

“It’s still in our hands with two games to go. Bray away isn’t going to be easy, but the important thing is we get over that and then look at Cork at home. We’re confident.”