Cabinteely set off on right foot against Wexford Youths 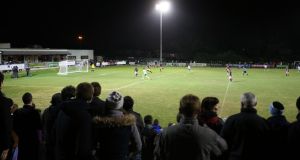 Fans look on at the Airtricity League First Division game between Cabinteely and Wexford Youths at Stradbrook. Photograph: Inpho

The pageantry of a new beginning. A be-spoke temporary stand, a smoke machine, flames that shot into the night sky from dispensers on the sideline and finally a bagpiper, who led the two teams onto the Stradbrook pitch.

Just a mere five and a half weeks after the FAI awarded Cabinteely SFC a place in the SSE Airtricity First Division and two friendly matches, the south Dublin club made their bow against Wexford Youths.

The senior team is an independent financial entity from the junior soccer club, the largest in the country, that boasts 950 players and 55 teams, but there is an overlap of two people on the executive committee, including the senior club chairman Pearse Toale, who previously fulfilled that role with the schoolboy section of the club.

The list of jobs appeared never ending but the posse of volunteers and club officials set about the work with an enthusiasm and dedication that augurs well.

The financial to-do list has been considerable but Cabinteely are grateful to one generous investor, a former schoolboy player at the club, who has provided tangible backing for their ambition. There are no jersey sponsors yet, a state of affairs that the club will look to address.

There is a natural pathway from the schoolboy wing to their new senior sibling. The trick is that the club first survive the teething process long enough to reap the benefits of the production line.

The club will now have a national outlet for their under-17 and under-19 teams.

The curiosity and novelty value attached to the game inspired a crowd of about 500 people, the majority of which were schoolboys.

Cabinteely had pre-sold about 300 tickets, some of which were season tickets, while Wexford Youths brought a busload of supporters.

The incongruity of soccer goals on a Stradbrook pitch, that has been the home of Blackrock College Rugby Club since 1962, provided yet another novel aspect to the occasion.

Indeed in delving briefly into the history books, local boy Peter Farrell of Everton and Republic of Ireland renown, and the man who scored the Ireland’s second goal in their 2-0 win over England at Goodison Park in 1949 – the first international the English lost at home – once scored a brace of goals in an under-16 cup final replay win in for the “Blues from Cabinteely” as the club was then known.

On a night of firsts, Kevin Knight had Cabinteely’s first shot on target, captain Robert Maloney forced his Wexford counterpart, and goalkeeper Graham Doyle, to palm his header from the resultant corner over the crossbar, while Shane O’Neill was the first Cabinteely player to be booked: these will be quiz questions in the years ahead.

The roar would have been heard back in Cabinteely.

A flare ignited on the terrace side of the ground, possibly a distress signal from a Wexford team that had just missed out on the play-offs last season and are strongly fancied to do even better this year.

Lloyd Cairns, a schoolboy at CBC Monkstown, earned a footnote in “Cabo” history as the team’s first substitute in senior football on 74 minutes when replacing Jordon Buckley.

The more Wexford pressed the deeper the home side dropped only sporadically managing to escape their own half but the visitors were relegated to half chances.

The home side held on for a momentous 1-0 victory.

No matter what Cabinteely go on to achieve they will remember a wonderful day in the club’s history, a reward for the efforts both on and off the pitch.