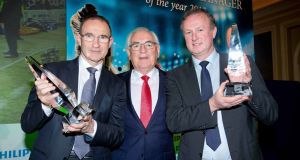 Without it being groundbreaking, there’s some symmetry to the O’Neills sharing the Philips Sports Manager of the Year award. At the 33rd instalment of this event, the Republic of Ireland’s Martin O’Neill and Northern Ireland’s Michael O’Neill were feted by the media.

It’s the third time this prize has been shared by two men. In 1990, Cork football manager Billy Morgan and hurling counterpart Fr Michael O’Brien were recognised for bringing Sam Maguire and Liam McCarthy to Leeside. Then, in 2012, Billy Walsh and Katie Taylor’s father, Pete, were honoured after a rare Olympic gold medal.

The O’Neills also fit the narrative of a national soccer manager winning after securing qualification to a major tournament. See Giovanni Trapattoni in 2011, Mick McCarthy in 2001 and Jack Charlton in 1987, 1989 and 1993.

To be nominated, the manager or coach must win a monthly award, a stipulation that took Stephen Kenny’s achievement with the double-winning Dundalk out of consideration.

Michael O’Neill was recognised in October after Northern Ireland secured qualification to Euro 2016 in France next summer. Martin O’Neill followed in November after the Republic saw off Bosnia and Herzegovina in a playoff.

In 1988, as a player, Michael followed Martin into a Northern Ireland set-up that had some residue from the golden era in its football history.

“God, yeah, ’82 was my first real experience of [watching] a World Cup,” said Michael O’Neill. “To see Martin captain that team, watching that as a kid inspires any young player. I was 12, 13, years of age at that time.

“It wasn’t too long after that, five or six years, that I was in the international team. And Martin had just retired at that stage, but a lot of the players that Martin did play with in ’82 and leading into ’86 – I know he missed the tournament through injury – were still there.

“Those were amazing times in Northern Ireland, to see the team do so well, especially in ’82.”

In sticking to the traditional means of selecting the overall winners, the judging panel – made up of six media outlets, including The Irish Times – overlooked Brian Cody despite Kilkenny capturing an astonishing 11th All-Ireland hurling title since he took over in 1999.

Missed opportunities in this regard seem to have been 2007, when Paul Doolin guided Drogheda United to a league title, and 2008, when Declan Kidney got the second of his three awards for coaching Munster to a second European title.

Joe Schmidt was not present at yesterday’s awards in the InterContinental Hotel in Dublin, so his March award, for retaining the Six Nations, was picked up by Ireland team manager Mick Kearney.

Walsh was another monthly winner unable to attend, but did send his thanks in a video message from the US, where he has moved to take up the position of women’s boxing coach.

“I think it will probably dawn on us when we are out [in France next June], when we meet supporters from Northern Ireland who might have been around in ’82,” Martin O’Neill added when asked about how special it was to have both football teams from this island travelling to a major tournament for the first time.

The 63-year-old smiled when asked whether the 1982 World Cup experience could prove of any value this summer.

“Not unless Norman Whiteside can still play and he declares for the Republic,” he quipped.”