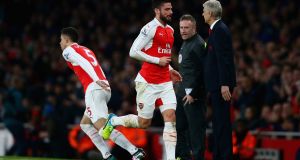 Olivier Giroud runs past Arsenal manager Arsene Wenger after he was substituted by Gabriel following Per Meterescaker’s sending off. Photograph: Clive Mason/Getty Images

There was a great deal of booing in the Premier League over the weekend. Old Trafford saw the loudest boos, with the home fans now in open revolt against Louis van Gaal, while Everton supporters were also extremely angry after Roberto Martinez’s side continued their recent poor run by losing to Swansea.

The Emirates Stadium had its share of booing, mostly directed at the returning Cesc Fabregas and the reviled Diego Costa, who were two of the outstanding performers in Chelsea’s 1-0 win.

And yet there were scarcely any boos at the final whistle. If supporters boo when they think the team has fallen short of the minimum standard of performance, it sounded as though for a majority of the Arsenal faithful, losing 1-0 to Chelsea was about par, or at least not hugely surprising.

Arsenal remain second-favourites to win the title, only fractionally behind Manchester City in the betting, and yet based on their performance over the first 23 matches, they are on course to finish with just 73 points. 73 points has never been enough to win the Premier League.

Arsenal also finished with 73 points in 2013, and the tally was only good enough for fourth place, 16 points behind the champions, Manchester United. In 2008, when the strength of the Premier League could be gauged from the fact that it supplied three of the four teams in the semi-finals of the Champions League, Arsenal finished third with 83 points.

In fact, Arsenal have finished with more than 73 points in 10 of Arsene Wenger’s 19 seasons at the club. This season’s title contenders are also on course to finish with 61 goals, their lowest tally since 1999.

In other words, what we are seeing this season is not the emergence of a third great Arsène Wenger team, worthy of consideration alongside the 1998 Double-winners and the 2002-4 Invincibles.

What we are seeing is an average Arsenal team, who are only in the running to win the title because they have continued doing what they usually do while most of their usual rivals have imploded. In a normal season, this Arsenal side would already be seven or eight points off the top.

There is at least a certain respectability in maintaining your standards while everyone else has let theirs slip. In recent weeks it’s looked as though Arsenal’s only realistic challengers are an unreliable Manchester City, and the Leicester upstarts who, everyone has been assuming, will soon fall away. Most weeks, Arsenal look a better side than either rival.

This has led to a growing sense that Arsène Wenger could be on the verge of his finest hour. Twelve title-less years of misfortune and indignity coming to a glorious end, in the ultimate vindication for patience, planning and perseverance.

But the manner of yesterday’s defeat suggested that Arsenal haven’t really evolved. It was a typical display of possession without penetration, undermined by two big mistakes.

The crucial mistake was made by Per Mertesacker, who dived in to a tackle he had no need to make. The eagerness with which Diego Costa threw himself to the ground showed how badly Mertesacker had miscalculated the situation: the Chelsea man much preferred to get his opponent sent off than take his chances in a one-on-one against Petr Cech.

Yet while this was the sort of mistake you wish your World Cup-winning centre-half wouldn’t make, Mertesacker had been exposed by some familiar flaws.

Wenger’s Arsenal always play a high defensive line, unless there is pressure on the ball in midfield, there’s always the risk that a quick through-ball will expose the defenders. Rather than attempt a tackle on Willian in midfield, Mathieu Flamini backed away pointlessly, allowing Willian all the space he needed to pick out the forward pass to Costa.

Wenger quickly compounded Arsenal’s problems by making the second big mistake. Needing to bring on Gabriel to replace Mertesacker at the back, Wenger took off his leading scorer, Olivier Giroud, to the consternation of the home fans.

“Do you want to make a poll for every decision to see who does what?” Wenger later asked, describing it as “a normal decision”.

He explained that “we knew we would have to drop deeper and use pace to get forward,” and perhaps that analysis made some sense at the time. Unfortunately Diego Costa scored within two minutes of the substitution, changing the dynamics of the game. Now Arsenal had to attack a side that was happy to sit back, and Wenger had removed their penalty-box specialist.

There had been rumours before the game that Giroud was struggling with an ankle problem. Wenger may have calculated that leaving him on was too much of a risk, given that he might be forced to substitute him later.

But it was a risk that was worth taking. Giroud had eight goals in his previous nine games. Taking him off and playing without a striker was obviously a conservative decision that smacked of the manager settling for a 0-0 draw.

Afterwards, Wenger criticised the role played by Costa’s gamesmanship in Arsenal’s defeat. But he will also be troubled by the nagging sense that his own loss of nerve was just as significant.