Keane: ‘Thought it would be easier at Celtic’ 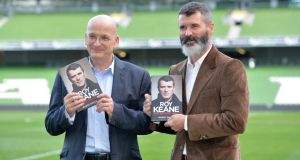 Roy Keane on his options once he knew his career at Old Trafford was over.

Real Madrid offered me a year and a half deal. Everton wanted me to go to them. Bolton, too, who were also on my doorstep. I met Sam Allardyce. But I went to Celtic for fifteen grand a week basic. It was a massive pay cut.

I met Gordon Strachan who told me: “I’m not really too worried if you sign for us or mot. We’re okay without you. So I said to myself: “Fuck him, I’m signing.”

Michael (Kennedy, my agent) had been over to Madrid and he’d negotiated a deal with Real. Michael had given me a heads-up that Butragueno would be phoning so I took my mobile everywhere with me. And, how’s my luck, he rang me when I was sitting on the toilet.

I should have appreciated Real’s offer more. With hindsight I should have said to myself “Go. Go to Spain, ” live there for a year and a half, learn the language, learn the culture.

The weather and training might have given me another lease of life, two years of playing. But instead – as usual – I was looking at what might go wrong. “Hindsight” is a fucker of a word.

I didn’t want to move to Spain. As much as anything else, it was fear that decided it for me; fear of the unknown. I thought I could make a bigger impact at Celtic than I would have at Everton or Madrid. To be honest, I thought it be a bit easier at Celtic.

Actually, it wasn’t really about which club I should go to. The fact is, the morning I left United I lost the love for the game a little bit.

Michael Kennedy begged me not to sign for Celtic. He wasn’t happy with the negotiations or their, ‘take it or leave it,’ approach. But I still think that if I had not signed for Celtic then I would have regretted it.

They’d offered me the least money of any of the clubs. I read somewhere that I went to Celtic for forty or fifty thousand a week but it was fifteen basic that they offered me.

I wasn’t motivated by the money, or just the money, I think there might have been a bit of guilt about that, when I left United, the amount I’d been earning there and earning so much for something I loved doing anyway.

I’d said in interviews over the years ‘I’d like to play for Celtic one day’. I’d said it casually but now I felt I could not go back on my word.

And I wanted to play against Rangers in an Old Firm game. For the atmosphere, the buzz, the experience.

But more than any other consideration, I just thought, ‘I want to treat myself here, ‘I’m going to go where I want to go and fuck the money’.

I wouldn’t have called it a dream but I’d always liked Celtic. And the Irish connection would have been on the back of my mind. I felt a bit of loyalty to them. This decision was a purely selfish one. I just wanted to play for Glasgow Celtic. Celtic is a special club.”

First day after training at Celtic.

My hip was fuckin’ screaming from the warm-up. Not aching, screaming. I couldn’t budge. I thought to myself: “You should have retired. You should have packed it in.” Sometimes you have to be courageous enough to say no. No, is a sentence. Less than a year ago, I’d been in the Highbury tunnel, imposing myself on the game before it started. Now I was lying on a hotel bed wondering if I could get through training.

“My first Old Firm game was at Ibrox and we won 1-0. It was brilliant. The atmosphere was brilliant, fuckin’ electric. The hatred, I enjoyed all that. I got a yellow card for a foul on Prso and they were baying fora red card.

I was man of the match and that was a little moment of satisfation, another tiny victory. But at this stage I was taking painkillers before every match. An injection in the bum; Diclofenac or Voltarol. The cause of the pain was a labral tear of the hip and I understood that playing on could worsen the tear.

I was taking an injection before the game and at half time just to get through. And you do get through but I’d be in bits. I could justify the painkillers for the Rangers’ game but now I was taking them for every game. That was when I thought ‘this is not good’.

“I’d been taking them in England but only for the big games - Arsenal, City - when I knew I’d physically have to be at my best. Now, common sense was telling me that my days were numbered.

We beat Hearts at Celtic Park in early April and won the league title. I was injured that day. It was hard to to join in the celebrations. I had not played enough. I won League and the League Cupmedals with Celtic but I never really contributed. I look back at my time there and and I’m a bit embarrassed by it.

Why didn’t I go to Everton? I would have regretted not going to Celtic. I liked David Moyes and the chairman Bill Kenwright was very good with Michael Kennedy during the negotiaitons. They had offered me a lot more than Celtic.

But I think I would have found it hard playing for another English team. Which is stupid. Everton might have given me a new lease of life, I might have had two or three more years there.The system they played would have suited me. I would have been a proper sitting midfielder.

4 Ian O’Riordan: Zen and the art of social distance running