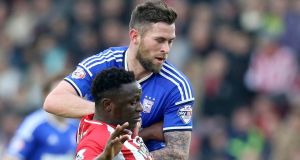 There was a time, not so long ago, when Daryl Murphy became accustomed to life in Darren Bent’s shadow. He was the bargain buy from Waterford Town playing bit-part attacking roles from the bench, while his €20m team-mate dominated centre stage.

On Saturday the two former Sunderland strikers meet again with their positions somewhat reversed since those days at the Stadium of Light. At the age of 31, Murphy will run out at Portman Road as the Championship’s leading scorer and the man spearheading Ipswich Town’s attempt to return to the Premier League for the first time since 2002.

Bent, meanwhile, is expected to make his debut for Derby County at the club where he began a career which led to Charlton, Spurs and Sunderland before hitting an unexpected wall at Aston Villa.

While Steve McClaren hopes the 30-year-old’s arrival on loan from Villa Park will bolster Derby’s promotion push, the striker trusts the former England coach can help him stem a decline infinitely more dramatic than anything suffered by Fernando Torres.

In contrast, Murphy’s rise, emphasised by his status as the newly crowned Championship player of the month, has not so much been gradual as almost imperceptible.

It is perhaps no coincidence that at Ipswich he is working with the manager who originally spotted him playing for Waterford. Since their East Anglian reunion Mick McCarthy’s trust in a slow-burning talent, whom he brought to Sunderland for £100,000 10 years ago, has transformed Murphy from marginal squad man, frequently shunted out to the wing, to the division’s most feared forward.

Along the way Roy Keane has also served as a mentor, initially encouraging his development at Sunderland before signing him for Ipswich. Subsequently toughened up by a spell at Celtic before returning for a second stint in East Anglia, Murphy has scored 17 league goals this season – more than he managed during the entirety of his spell in the northeast and Glasgow. His potential may have taken a decade to fulfil but the patience of a manager who has previously led Sunderland and Wolves into the Premier League is finally paying rich dividends.

Six of Murphy’s goals have arrived in Ipswich’s last five games as McCarthy’s budget band of free transfer imports extended their unbeaten Championship run to 11 matches, winning eight. They’re now second, two points ahead of Derby in a division in which the leaders, Bournemouth, and fourth-placed Middlesbrough also are very strong.

“It’s a massive top of the table game,” says Bent, who will make his first return to Portman Road since leaving for Charlton. “They’re flying and we’re flying.”

In a season in which Bournemouth’s Eddie Howe is depicted as the hottest young British manager around, Boro’s Aitor Karanka has become synonymous with continental sophistication and McClaren continues to rehabilitate his reputation as an exceptional coach, the unglamorous McCarthy seems the odd one out.

Yet pound-for-pound he has arguably done a better job than anyone. The only fee this increasingly flexible tactician has invested in a first-teamer since joining just over two years ago is the £10,000 that recruited Tyrone Mings from Chippenham Town a year ago.

When Aaron Cresswell swapped Ipswich for West Ham last summer, a promotion push looked unlikely, but since replacing Cresswell, Mings has established himself as the division’s best left-back. Indeed he is so good that Karanka and company will be praying a mooted move to Arsenal takes place this month.

McCarthy is big on trust and he has played the free transfer market cleverly, acquiring players he knew he could rely on. Perhaps most notable among them is Christophe Berra. Once of Wolves, the centre-back has been Ipswich’s cornerstone this season, making more blocks and clearances than any other Championship defender.

“Portman Road is a hard place to play,” says Bent. “Away teams don’t like it. But I’ve scored on my debut a few times and I’d love to start repaying the faith Steve McClaren has shown in me.”

Determined not to be eclipsed again, Murphy will be anxious to upstage him.