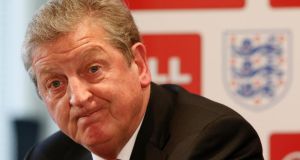 Wayne Rooney’s eagerness to make a positive impact at the World Cup in Brazil has prompted him to take two fitness trainers to Portugal this week to ensure he is fully recovered from a groin complaint by the time England begin their training camp in the Algarve next Monday.

The Manchester United forward, who missed his club’s last three games of the domestic season with the injury as well as a stomach bug, was named in Roy Hodgson’s 23-man squad yesterday. The selection appears bold and progressive, with only 12 survivors from Euro 2012 and five who have played at a previous World Cup, with places for the relative international newcomers Raheem Sterling, Ross Barkley and the Southampton trio of Adam Lallana, Luke Shaw and Rickie Lambert.

Fitness doubt
The only fitness doubt that remains is Phil Jones, who has a damaged shoulder. Everton’s John Stones and the Liverpool full-back Jon Flanagan are the only two of the seven stand-by players who will travel with the full squad to Vale do Lobo for a five-day training camp when the squad assembles after having this week off to relax. Rooney flew out for his break in Portugal last night with two fitness trainers, hired at the 28-year-old’s expense.

“He’s going with two trainers, and [United’s head of fitness] Tony Strudwick has been in touch with us wanting to know about the pitch in Vale do Lobo,” Hodgson said. “This is a free week, a week where players go off and many do go to Portugal, where they have homes. But Wayne is so determined to be up and running when we get there on the 19th of May that he’s going to continue his programme so he’ll be able to join in straight away.

“I’m not as desperate for him to be fully fit on the 19th – I’m thinking more about the Italy game on June 14th – but it’s still quite laudable that that’s the way he’s thinking and I’m not trying to dissuade him. But if I do get there on the 19th and the fitness people say he needs two or three days, I won’t be shedding any tears.”

Rooney had chosen to visit Las Vegas before Euro 2012, where he was suspended for the first two group games, and, despite scoring in the third to secure England’s progress, looked sluggish as the team departed at the knockout phase.

“But the attitude and the desire are there,” said Hodgson. “It’s not right to put the hopes of the nation on the shoulders of one man. The four forwards we’ve selected are very good.

‘England’s goals’
“I’m hoping the responsibility for scoring England’s goals is shared and that might give Wayne the chance to show the other aspects of his game. Has he got the ability? Yes, he has. Let’s hope he can show the form that makes Wayne Rooney the player he is.”

The England manager praised the impact made by Sterling, Barkley and Jordan Henderson, suggesting the youngsters had “imposed their ability on my thinking”. He had paid his latest visit to St Mary’s on Sunday to watch Lallana and Shaw, who are the subject of bids from Liverpool and United respectively. “I chose this squad because I believe it’s right for this moment. Time could prove me wrong. Circumstances can prove me wrong and results can certainly prove me wrong but I feel comfortable because a lot of thought has gone into this squad.

“We have agonised over certain decisions, Ashley Cole or Luke Shaw being the obvious one, but we’ve made our final decision in good faith. We believe it’s a good squad. We believe in the players.”
Guardian Service