“I know people think I’m a little bit crazy, but I would have been crazy to turn this down.”

No prizes for guessing who got back today, and the wild-eyed boy had much to say. Roy Keane did not disappoint, in his first press conference as Assistant Manager of the Republic of Ireland soccer team. 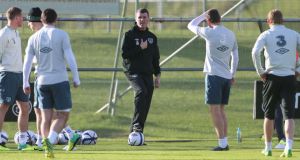 No prizes for guessing who got back today, and the wild-eyed boy had much to say.

The Republic of Ireland’s new assistant manager - formerly of shunned-captain fame - is back in town and if they don’t know by now, forget ‘em.

Before a word was spoken in Malahide’s Grand Hotel, Roy Keane dismissively rolled his eyes on hearing one excitable member of the press corps herald his entrance. The room was spellbound again.

Martin O’Neill insisted yesterday he wouldn’t muzzle his number two and that appeared the case, as Keane answered all those burning questions with the sincerity of old.

“The past is the past”, he said, when asked how he could reconcile his current position in the FAI with the entrenched one he has been banging on about for so many years.

“I’m not here to try and change anyone’s opinion of myself, or decisions I’ve made in the past. I spent years trying to please everybody and, trust me, it’s a waste of time and energy, you have just got to do what you think is right and get on with it.”

The Cork man dismissed suggestions he is in uncharted territory as an assistant and said he had “been answering to people” throughout his career. “I’ve no problem with that, particularly when I’m working with people who show me respect”.

Keane said the surprise union all happened quickly, “a couple of days”, which involved a brief meeting with O’Neill before “a meeting with (FAI chief executive) John (Delaney) and Martin in London and full steam ahead.”

O’Neill was the “big attraction”, he added, before insisting he’d been eyeing up potential mentors for a few years and the Derry man was always near the top of the list, but they’re “certainly not buddies”, they’re “not a pals act”.

“Martin’s a very serious manager. I’m hoping he’s looking at me and thinking I’ve got a chance to be a decent coach and a decent manager and I can bring something. Working with Martin, hopefully, will be a good experience for me.”

Later, when pressed again, on how it all came about, he added: “This was the opportunity right in front of me. I know people think I’m a little bit crazy, but I would have been crazy to turn it down.”

Asked about the professionalism he will bring, the type that saw him turn up at training 90 minutes early yesterday, he said he wasn’t looking for pats on the back for that. “You expect everyone to be on time for work. Jesus! You’re not asking for miracles.”

But he certainly warmed to the occasion and seemed particularly pleased to report that it had all gone swimmingly so far in the logistics department..

“We’ve had a lovely few days, the hotel has been lovely, the food's been excellent, the training ground is lovely, no potholes. We've got footballs. It’s been great, bibs and everything. Major progress.”

The squad, he has criticised before, but all of it above board and constructive, he feels.

“I felt during the Euros that Ireland should have done better, and surely there is nothing wrong with saying that when they lose their three games.”

He certainly never told Ray Houghton that there were players there that are better than he was.

“I don’t think I said that. I don’t remember saying that, maybe Ray had a few pints on him. Maybe I said something along the lines of maybe there is more potential. And sometimes the players are the last to think that.”

Nor did he consult any of them before taking the job. "No, absolutely not," he grinned. "It's none of their business, that's a ridulous question."

His role now is to help them to push on. The minimum expectation is to qualify for Euro 2016, that’s the first floor, and Keane is there to help, not to be hinder. And he’s not necessarily the bad guy, either.

“You don’t know Martin as well as you think, do you,” he chided. “He makes me look like Mother Theresa. It’s going to interesting.”